All Winnie the Pooh Characters, Ranked

Yes, we all grew up with watching this series, didn’t we? Whether it is the animated series or the movies, Winnie the Pooh has captured our hearts as we’re immersed into the world of the hundred acre forest where we see how these anthropomorphic animals engage themselves in some amazing adventures together. Based on book written by the British author A. A. Milne and illustrated into very colourful adaptations of the book by Ernest H. Shepard, it revolves around the teddy bear Pooh and his friends. The beauty of Winnie the Pooh is that it appeals to everyone and not only just kids. The viewers/readers are struck by its absolute sweetness and innocence, filled with smart humour followed by some clever rhymes and the diversity of these characters who are so different from one another but are lovable. It pays an ode to our childhood and friendship which is very poignant for the adults and has brought joy to all children for almost half a century. Although the lines and vocabulary are more suited for adults, it works exceedingly well for both. 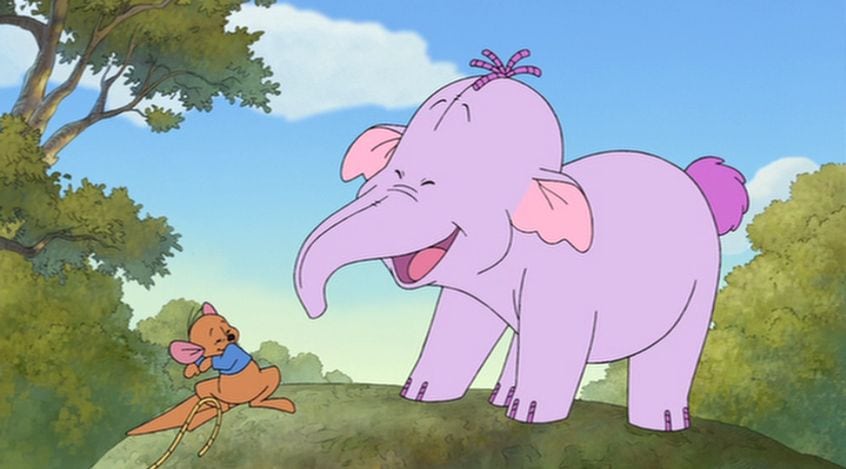 A Heffalump, Lumpy is one of the side characters of this series. Pooh and his pals find out that heffalumps are not predators. Rather, heffalumps are herbivores so they are not at all dangerous. His looks are quite distinctive with purple nails, pink ears, five purple tufts of hair on his forehead and a purple bushy tail. Lumpy is an adorable, playful elephant who loves to bounce, doles on honey (just like Pooh) and chickens out quite easily. He develops a friendly relationship with Roo, as seen in the picture above. 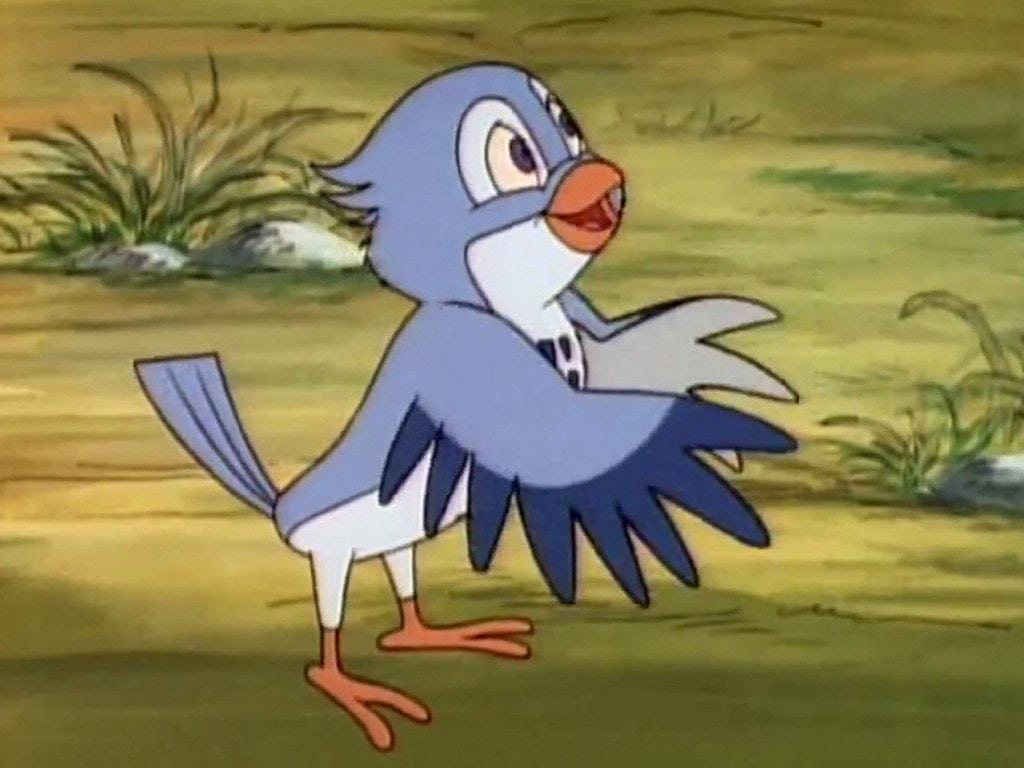 One of the side characters in this series, this female bluebird is a small, adorable and pretty young chick who gets lost in a snowstorm before she is rescued by Rabbit who takes her in and decides to raise her. Both Kessie and Rabbit have a very sweet father-daughter-like bonding which is very sweet to watch. She is shown to be innocent, kind, resourceful, brave and most importantly very intelligent as she even manages to outsmart some would-be kidnappers. 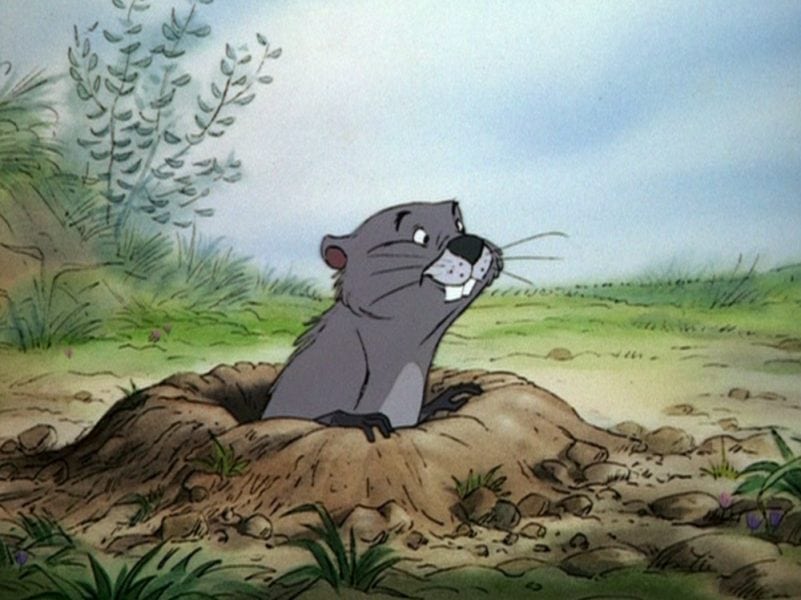 Another inhabitant of the hundred acre forest, Gopher is an extremely hard-working, kind and passionate animal digger and miner who is often seen spending most of his time busy working in tunnels and mine-shafts. Despite having a low social life, Gopher doesn’t just keep to himself for he is seen interacting with other animals. What makes him so memorable is that he has this comical, quirkiness side to him foe example, he has this habit of whistling out his sibilant consonants when talking to others. He is also one of Pooh’s closest friends. 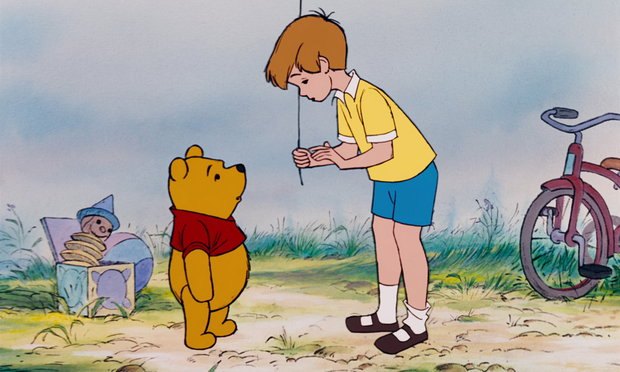 Being the only human in the Hundred Acre Forest, this friendly young boy (who seems rather intelligent for someone of his age), is an adventurous, playful, smart, cheeky and spirited kid who spends majority of his time playing with his stuffed animals, his favorite one being the teddy bear Pooh which he received when he was just one years old. The entire world of Pooh is a fragment of his imagination which though may be vivid but also takes his imaginative escapades too far which also explains that he has schizophrenia. Since all his stuffed animals have the mentality of toddlers, Christopher assumes the role of a parent figure to these stuffed animals. He shares a very special bond with Pooh as a result, these two are almost inseparable. The only problem with his character is that he’s not that interesting as compared to the rest of his stuffed animals. Ewan McGregor plays the adult version in Disney’s newly released film ‘Christopher Robin’. 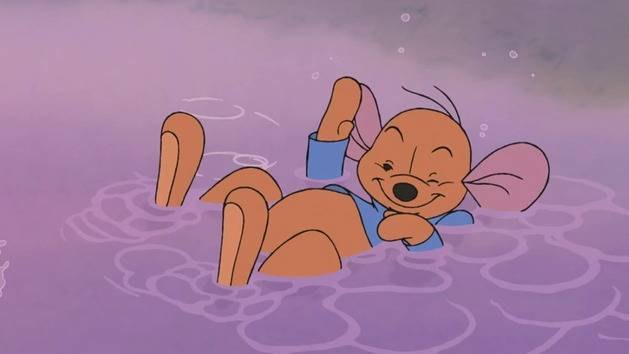 Roo takes after Tigger with the fact he’s also very spirited, playful, clever, energetic, happy-go-lucky, mischievous and adventurous. The joey is very fun-loving and looks at the word in a very sympathetic and loving way. He takes great joy in discovering the small wonders in life. Roo is often overprotected by his mother Kanga and despite his mother’s frequent warnings regarding his safety, he pays absolutely no attention to what is gong around him and is often found to be wandering into danger. He also prefers to sit in his mother’s pouch with not a lot of interest in venturing out. These two instances show signs that he displays symptoms from the autism spectrum. He’s fun yes, but still kind of a bit exhausting.  Yet, he often expresses his thoughts and feelings that make him seen wiser than he is capable of and has this raw determination of proving himself to the adults around him.

Considered as one of the most smartest resident in the Hundred Acre Forest, Owl is a kind, wise, absent-minded, friendly, proud intellectual. Have you ever noticed that signs in the world of Winnie the Pooh are usually misspelled, with letters reversed and inverted? Well, among the animals in the Hundred Acre Forest, Owl is the only one with the ability to read and write which explains wy he makes all those charming signs. All of this proves that dyslexia which he suffers from which has nothing to do whatsoever with Owl’s or even ones intelligence for that matter. Still, his intelligence seems to be questionable as he lacks basic common sense. He also has a knack for telling long, bizarre stories which are quite fun but after a while become drawn-out, tedious and boring. Still, he is quite egoistical, very pretentious and is so talkative that he never gets to the point! 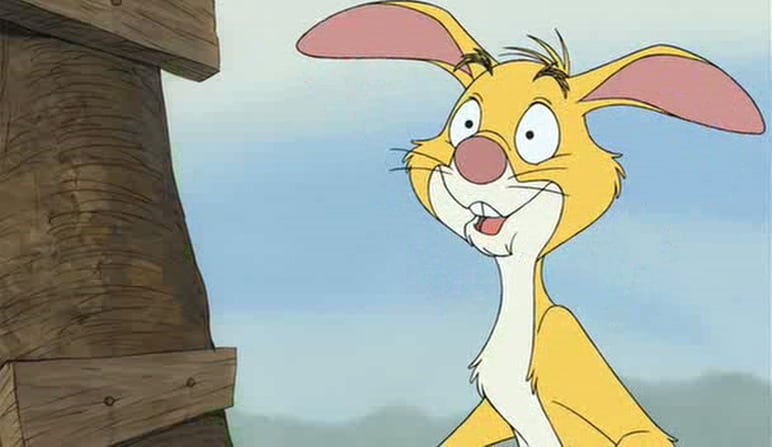 Arguably, one of the most complex characters in this series, Rabbit is good-hearted, well-intentioned and an extremely caring character but he can sometimes be very fussy, compulsive, easily-stressed, worrisome and short-tempered. This is due to the fact that Rabbit is the sort of character who needs every single thing organized at all times especially when it comes to gardening, something he truly loved doing. He devotes all his nervous energy in counting, recounting, arranging and rearranging. When anything is out of place or order,the others are sure to feel the wrath of Rabbit. This explains why he is often shown to be egoistical, grumpy, bossing and paranoid which can mean only thing: he has an OCD! Still, Rabbit is often concerned with the well-being of his friends and is often seen risking his own life for the safety of others and even gets frustrated and filled with guilt when his friends don’t take some situations seriously and is unable to assist them. One of the most hilarious involving him are when Tigger is often seen annoying the crap out of him! Despite being one of the most mature characters in this series, he is accident-prone and does from time to time, suffers a great deal of misfortune. Overall, Rabbit is truly one of the most unique and fascinating character in this series as he exhibits many emotions and traits found most in human beings. 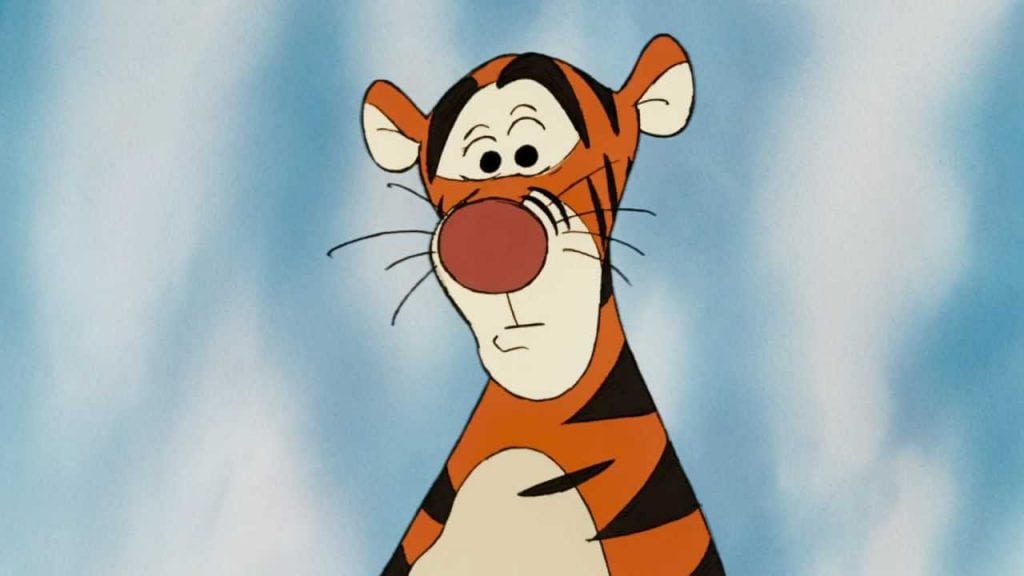 One of the most eccentric members of The Hundred Acre Woods, Tigger is often to seen to be over energetic, rambunctious, childish, mischievous and quite playful too. This fanciful character can’t even hold himself for even one moment which clearly shows that he’s a classic case of ADHD. Even when he clearly needs a rest, Tigger is shown to be very super active. He also exhibits poor impulse control like bouncing even when he’s not wanted assuming everyone around him wants to be similarly engaged in whatever he is doing. With a fun-loving nature and childish innocence, he is quite optimistic and carefree like Pooh too. He also loves irritating Rabbit with every opportunity he gets. He is also considered the most social of all animals. Despite all his shortcomings, Tigger is very much the heart and soul of the Hundred Acre Wood’s social circle. The fact that he mispronounces words is so adorable but ye sometimes, he takes his antics a bit too far, though not done intentionally. Still, Tigger can be annoying as shit too sometimes! 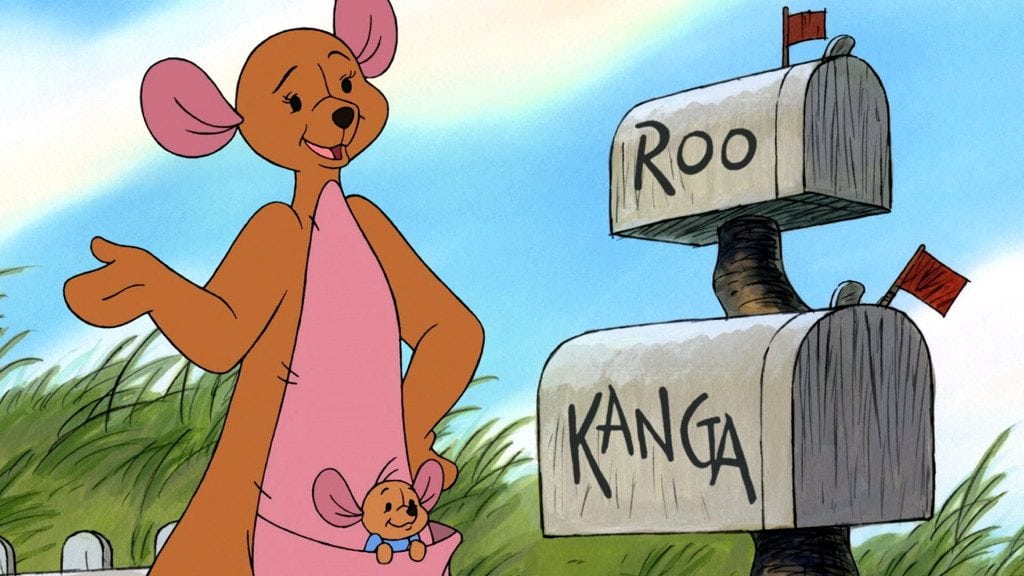 Being the sweet and caring mother of Roo, Kanga is a kind, understanding, responsible, sweet-tempered Kangaroo who also poses as a motherly and protective figure to the other Hundred Acre Wood characters who never hesitates in giving advice and helping those in need. Still, Kanga has a good reason to be anxious as her son Roo’s often wandering around, ignoring all her warnings regarding his safety. She is anxious as to she will raise her child without a partner. Who knows, Roo may even grow up to be a juvenile delinquent. All these frightening prospects keep her at the edge and her son safely tucked in her pouch which perhaps explains that she probably suffers from social anxiety disorder. Still we have to admire the fact she is a single mother in a male-dominated society . Yes, she’s definitely a strong character and you’ve gotta give her for that. 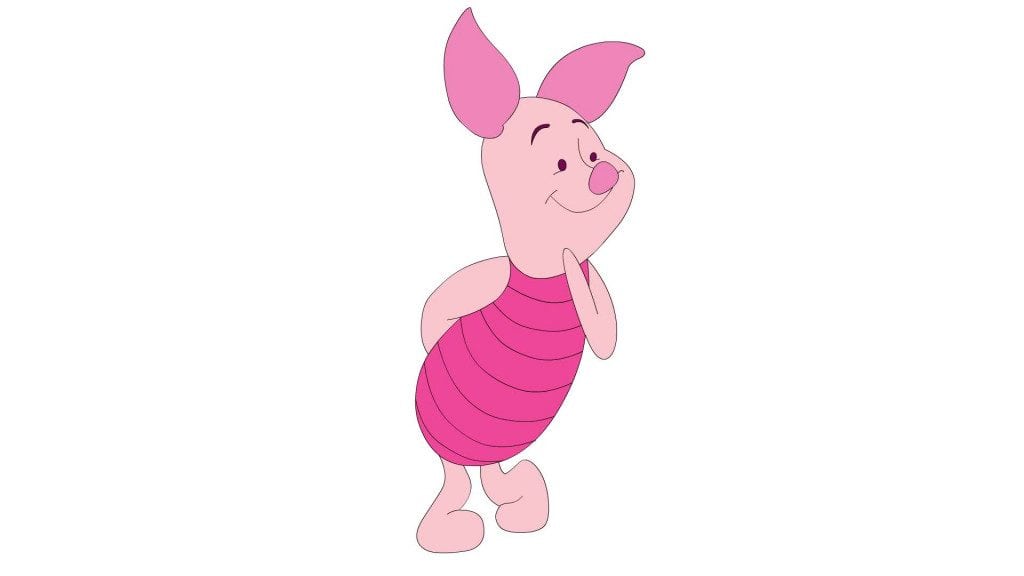 “It’s often hard to be brave when you’re such a small animal.” Aww Piglet, we totally get you. Being timid, fragile and insecure, he lives his life in an anxious whirl, doesn’t he? To him, anything might happen or does happen is a cause of concern for him. Sudden movements and noises like those from Tigger can send Piglet running to hide. Which is why he’s seen hanging out with Pooh more often he prefers his calm, distracted ways. Yes, he does seem to have Generalized Anxiety Order. Which is why all of us can relate to his anxiety and nervousness. He also has speech impediment which causes him to stutter. Though he’s far from being the bravest animal among his friends, he yet is a reluctant hero by trying to avoid potential danger by avoiding to venture out anywhere with his friends. Also while we’re talking about hmm, what’s up with his stomach? Is he like a part armadillo?

2. Winnie the Pooh (aka Pooh Bear) 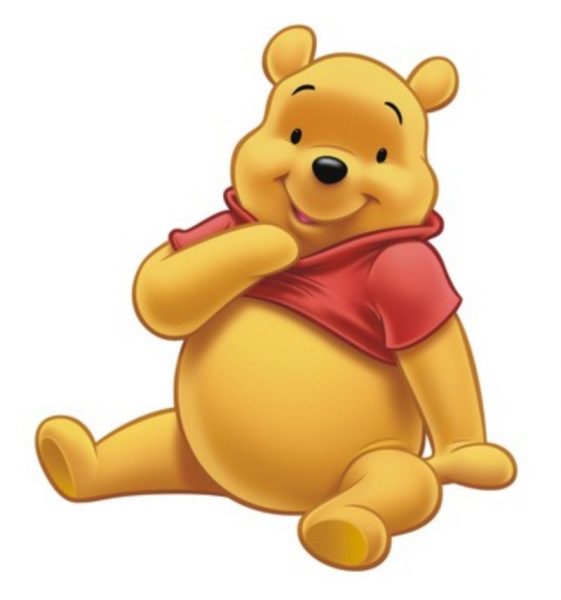 Isn’t Pooh just the best? With a hilarious voice, you gotta love how he misspells honey as “hunny”. Ah yes, Pooh and his undying love for honey have become so synonymous that watching him dole on honey makes us wanna crave for honey too! He seems so chilled, going out for a stroll as if he’s got nothing to do at all. Often being labelled as the leader of the group, Pooh is seen to be quite optimistic at all times. He can also be courageous at times too. overall, we just love him for being so slow, naive, gluttonous, dim-witted, caring, friendly, forgetful, gullible, childlike and most importantly, very cool indeed. 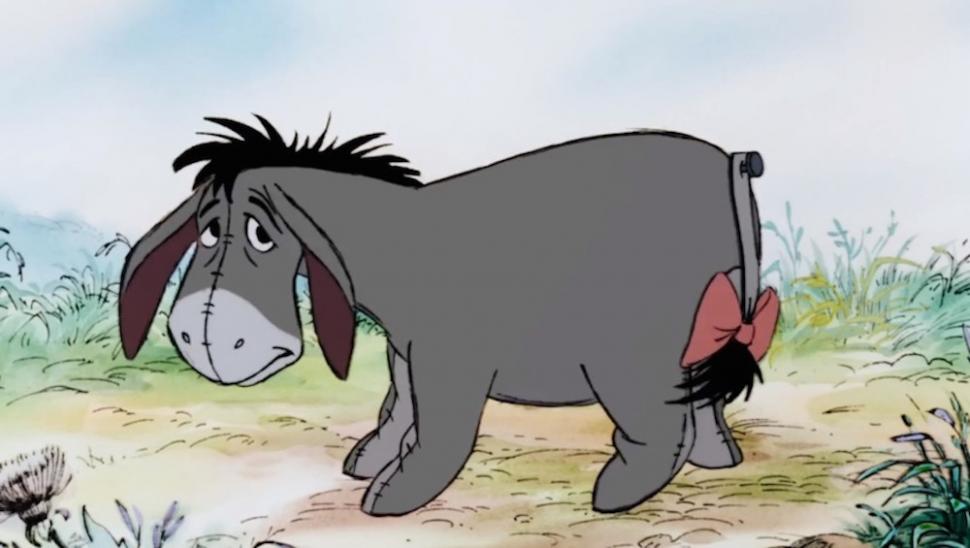 Yes, Eeyore has to be undoubtedly one of the most saddest characters in children’s literature. His demeanor exemplifies a severe depression, more specifically chronic dysthymia. Poor Eeyore is often seen to be in a state of depression and sadness. Even when good things happen, he’s bound to put a depressing spin to it. In fact, it seems to be as if he’s quite comfortable  with enjoying feeling down like all the tie. This is while we often feel for this pessimistic and gloomy old-stuffed donkey. You gotta love the fact that the makes sardonic jokes like all the time. Apart from his cynical trait, his tail has to be his most defining trait as it frequently detaches from his bottom and winds up getting lost for a period of time. Nevertheless, he still seems generally appreciative of his friends’ efforts in cheering him up and strives to be a good friend. He also loves sad stories because they make him feel more appreciative of his life. Which is why, Eeyore tops this list.