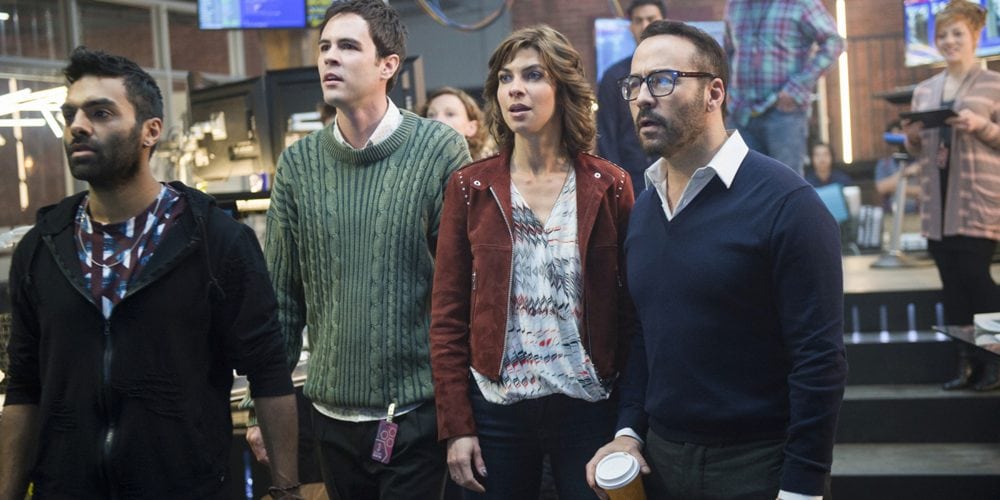 ‘Wisdom of the Crowd’ is an American drama television series that has been developed by Ted Humphrey. The show is based on the Israeli series which goes by the name created by Shira Hadad and Dror Mishani. ‘Wisdom of the Crowd’ airs on CBS and first premiered on October 1, 2017.

The show is basically about a tech inventor who comes up with a cutting edge crowdsourcing hub in order to solve the mystery of his daughter’s murder. However, in the process, he ends up revolutionizing crime solving in San Francisco. The concept of ‘Wisdom of the Crowd’ essentially rests on the fact that the opinion of a group of people collectively will take into consideration more viewpoints and thus be more nuanced and cover broader perspectives than an individual’s opinion. We often find ourselves relying on our social media hiveminds when we need opinions on things or help in finding something. While this collective opinion concept has been around for a long time, the information age pushed it into the spotlight with platforms like Wikipedia. This series just shows another side to this platform and its applicability in society.

However, critics have not been too pleased with the show, and have said, “Wisdom of the Crowd wastes a talented cast on a formulaic procedural crime drama that wavers between modest returns and unintentional laughs”.

Wisdom of the Crowd Cast: Who is in it?

The main cast of the show includes Jeremy Piven of ‘Entourage‘ fame as Jeffrey Tanner; Richard T. Jones of ‘Judging Amy’ fame as Detective Tommy Cavanaugh; Natalia Tena best known for playing Tonks in the ‘Harry Potter‘ movies and Osha on ‘Game of Thrones‘ is seen as Sara Morton; Blake Lee of ‘Parks and Recreation‘ fame is seen as Josh Novak; Monica Potter of ‘Con Air’ and ‘Boston Legal’ fame appears in the role of Alex Hale; Jake Matthews is seen in as Tariq Bakari.

The recurring cast members include Ramses Jimenez as Carlos Ochoa, Malachi Weir as Mike Leigh, Ion Overman as Elena Ruiz, Abigail Cowen as Mia Tanner. Together, they help build a solid environment for the show.

Wisdom of the Crowd Plot: What is it about?

The story of ‘Wisdom of the Crowd’ centers around the main character Jeffrey, who is obsessed with finding out everything about his daughter’s murder. The San Francisco Police has arrested and jailed Carlos Ochoa, an acquaintance of Mia, for the crime, but Jeffrey believes they have arrested the wrong guy. The SFPD’s Det. Cavanaugh (Richard T. Jones) also believes the same and has a gut feeling that the real killer of Mia is still free and out there on the loose. Jeffrey decides to build an app taking help from a tech conglomerate. He develops an online crowdsourcing app named SOPHE.

The app starts to discover various unsolved crimes in the Silicon Valley area. It manages to help the case of the death of a young woman named Natalie Kirschner as her murderer is caught and is ultimately brought to justice. The users of this app in the city have a very important role in getting the culprit arrested. As Natalie’s murderer is apprehended, the app’s popularity increases. Jeffrey, however, remains disappointed for lack of evidence in the case he designed the app for. There is no concrete information that indicates that the wrong man was convicted for Mia’s death and the state is unwilling to reopen her case. Cavanaugh is also not happy with the decision taken by the state police.

One evening, a user of SOPHE posts a video from the night Mia was killed that shows an unidentified man exiting her apartment building and pacing outside. More evidence related to the case is posted the next day. The rest of the story follows Cavanaugh and Jeffrey as they try to get ahold of the real culprit based on the clues they find through this brilliant app.

There is no denying that SOPHE is somewhat akin to the system shown in the popular series ‘Person of Interest‘ but while the latter focused on the possibility of a loss of privacy, ‘Wisdom of the Crowd’ does not have any such qualms. For a show which champions nuanced opinions, it lacks nuance itself, and hopefully, if there is an upcoming season, the makers will decide to address this problem.

Wisdom of the Crowd Season 2 Release Date: When will it premiere?

‘Wisdom of the Crowd’ Season 1 premiered on October 1, 2017. As the show progressed, grave issues were brought to light. Actor Jeremy Piven, who plays Jeffery on the show, was accused of alleged sexual assault of actress Anastasia Taneie. Evidently, it didn’t help with the show’s ratings, that were already very low. According to Variety, the show was averaging 7.4 million viewers per episode in late November — which may have been enough to save the show barely, but no more with the added weight of Piven’s controversy. Moreover, it was critically panned as well.

CBS’s spokesperson made the official announcement, “they are looking into the matter. Also, there will be no return of Wisdom of the Crowd in the near future.” As of now, Season 2 of the show remains canceled. Though, fans should not lose all their hopes. There’s still a possibility that CBS or some other network revives the show. If that happens, we will update you about ‘Wisdom of the Crowd’ Season 2 release date.

Wisdom of the Crowd Trailer:

Check out the trailer for Season 1 of ‘Wisdom of the Crowd’ below. If you have not seen the series and are fascinated by how technology can help solve crimes, then this is the show for you.