Precocious child actors can either amaze us with their substantial gifts, or annoy us with their equal awareness of their cute factor and when to turn it on. Case in point, Shirley Temple…hit your mark kid, lights, camera, twinkle! And she did. Through film history several performances from children have been astounding, from Jackie Coogan in Chaplin masterful The Kid (1920) to Henry Thomas in E. T. (1982), through Anna Paquin in The Piano (1993) to Haley Joel Osment in The Sixth Sense (1999), children have often held their own with adult actors, sometimes stealing the film entirely.

Young actors are, or can be extraordinary improvisers, the challenge emerges when giving them a script and they must make those words, that character, their own. My struggle with most child actors is that they are always on, and cannot differentiate real life from acting, so they give in to the latter.

Young Jacob Tremblay was truly remarkable as Jack in Room (2015) working with Oscar winner Brie Larson. As a five year old who has lived in a heated garden shed since birth, his mother the victim of an abduction years before, he knows nothing of the outside world other than what he has seen on TV or what she has told him. Much of the film explores the adjustments both of them struggle with in adapting to society. There was some genuine clamouring when Tremblay was not nominated for an Oscar as supporting actor, though the truth of the matter, he was the lead, he narrated the story. In the media circus that led up to the Oscars and then after it quickly became evident he was a born actor, or he knew when to sparkle. 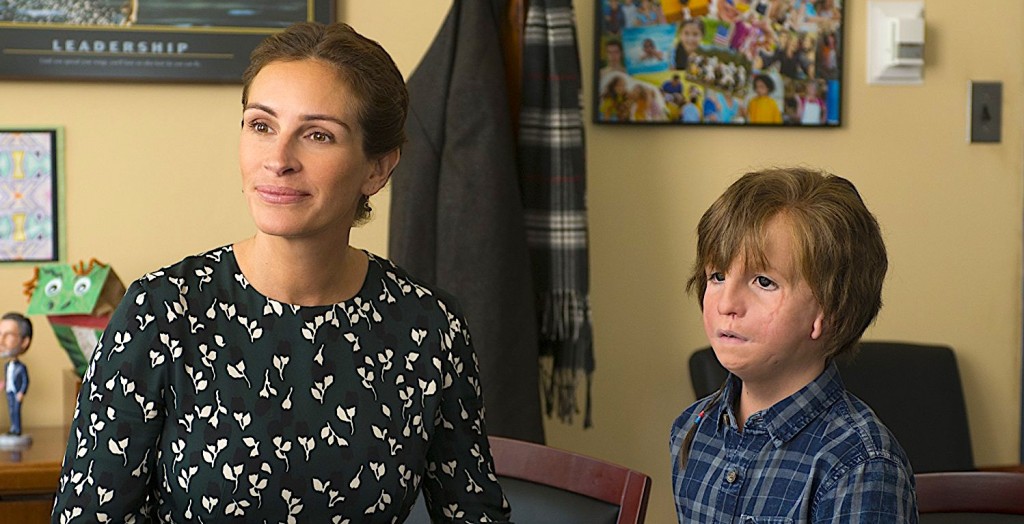 As it turns out he is a very good actor, excellent as Auggie, the facially deformed child heading off to school for the first time after years of home schooling and protection from his parents, portrayed with great warmth by Julia Roberts and Owen Wilson. Deciding he needs to socialize, with great trepidation they decide to send him off to middle school, the fifth grade.

With twenty-seven surgeries on his face, he keeps the hospital bracelets as souvenirs, his face is without a doubt deformed. However he is in no way as ferociously damaged as John Merrick, the famous The Elephant Man, or the young man in Mask (1985) portrayed winningly by Eric Stoltz. With his soul-searching eyes and sing-song voice, Tremblay is quite extraordinary in the film, capturing the loneliness and sadness of his plight, but also, and beautifully, the hunger to learn, to share what he has already learned, to be a part of life as it moves around him.

Yes he runs into the bullies, who are waiting for him, hoping to humiliate him, but Auggie has built up an armour through the years that they are not ready for. He takes their painful barbs, allowing their words to bounce off, at least on the outside. When he does make a friend, the beginning of many, it is pure cinematic joy to watch it unfold. There is something special about what unfolds between children beautifully captured here. 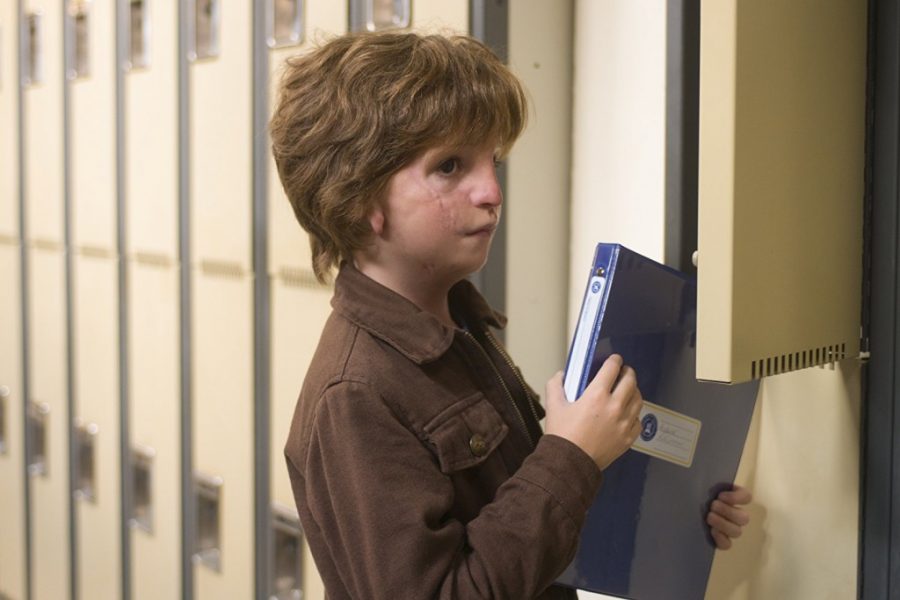 What gives Auggie, and the film for that matter its solid foundation is the rock solid love his parents have for him. In the eyes of his mother, portrayed with near luminous though understated beauty by Julia Roberts, he is beautiful, because she sees beyond his face, seeing into his soul. Yes he is different, but is different so bad? We are not all beautiful, so does this make a beautiful woman or man unique or strange? A mother is not capable of calling their child ugly, and Roberts character is no exception, the difference being, she could tell you why. The actress has quietly moved from being a major superstar to a rock solid character actress, happily able to ease into an ensemble.

She and Owen Wilson might seem an odd pairing as the parents of this little boy, both among the so-called beautiful people. To my surprise they were perfect. Wilson is the protective father, knowing what his son is going to get in the school yard, and worries for him. But deep inside he also knows his son his the inner strength to handle whatever comes his way.

There is a strong subplot moving away from Auggie, involving his sister that has a nice slow build, escalating logically through the film, and might shock some with where it goes.

Tremblay, as he was in a Room (2015) is a revelation here. From his lovely sing song voice, his expressive eyes, and his body language, he gives a superb performance as Auggie. Nothing showy, nothing over the top, nothing manipulative, just a realistic, very good performance that I confess caught me off guard. The young actor has a knack for making each moment entirely natural, real, a huge accomplishment.

How does the emergence of Wonder change the Oscar race? Like it or not it does, and will. Expect nominations in some of the major categories. It is the kind of uplifting, tearjerker the Academy, and audiences have proven to love. Interesting that the make up gives Tremblay the look of a very sad eyed puppy. A lovely film about a very brave little boy who can teach us quite a lot.