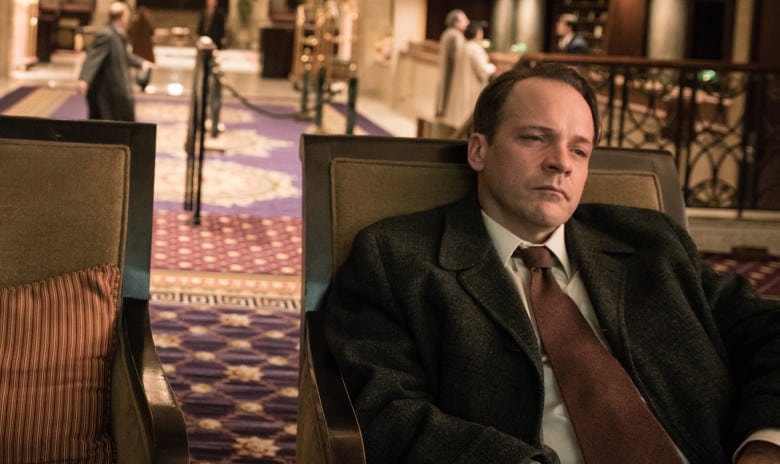 ‘Wormwood’ is an American docudrama miniseries that airs on Netflix and first premiered on December 15, 2017. The show has been directed by Errol Morris who acclaimed for works like ‘ The Thin Blue Line’ and the academy award winning documentary ‘The Fog of War: Eleven Lessons from the Life of Robert S. McNamara’.

‘Wormwood’ is based on the army scientist, Frank Olson, who took a plunge from a hotel window in 1953, that resulted in his death. In 1975 a bombshell report came out that linked this death to a top secret government experiment. So what was this government experiment? If you have watched BBC’s ‘Sherlock‘ I will need you, dear readers, to access your mind palace and think back to the episode ‘The Hounds of the Baskerville’. Sherlock stumbles upon a CIA project titled H.O.U.N.D. which ties in with the episode and deals with mind control. The truth is there was a real-life counterpart to it, called Project MKUltra. The aim of this project was to develop drugs that would lead to mind control and get confessions, besides making individuals go against their own will. People say that before LSD or acid became popular in the hippie counterculture, or before Timothy Leary coined the popular phrase “Turn on, tune in, drop out”, the Central Intelligence Agency got there first, and Olsen was an unwitting lab rat to this MKUltra experiment.

In the expert hands of Morris, the tale becomes exceedingly clear and critics have praised the show with The New York Times saying, “Mr. Morris presents a powerful historical argument in the guise of a beguiling work of cinematic art — and vice versa”.

Wormwood Cast: Who is in it?

The interviewing cast includes Eric Olson, Frank’s son, David Rudovsky, the family attorney, Seymour Hersh, an American investigative journalist, and Stephen Saracco. The main cast of the show is led by Peter Sarsgaard in the role of Frank Olson, Molly Parker of ‘House of Cards‘ and ‘Deadwood‘ fame, in the role of his wife, Alice Olson, and Christian Camargo as Dr. Robert Lashbrook of the CIA. Other notable cast members are Scott Shepherd in the role of  Lt. Col. Vincent Ruwet, and Tim Blake Nelson as  Sidney Gottlieb, the chemist, and spymaster who was linked to MKUltra. Jimmi Simpson of ‘Westworld‘ and ‘Black Mirror‘ fame appears as a CIA agent while Bob Balaban is seen as Dr. Harold A. Abramson, an early advocate of therapeutic LSD. There are several other characters including Eric Olson, the son, played by Stephen DeRosa, of ‘Boardwalk Empire‘ fame, who acts as the narrator.

In the event of another season, it remains to be seen if the same characters return, and if the story has to show any more secrets about the CIA’s activities and the collateral damage it caused.

Wormwood Plot: What is it about?

The show charts Frank Olson’s mysterious death and his shady CIA activity and his involvement with their MKUltra project. There have been allegations of drug abuse by Olson, forced by his CIA supervisor. The show tries to answer various questions along similar lines. The title ‘Wormwood’ is an allusion to a Bible verse “about a star that makes everything bitter, an allusion to biological weapons, and the effect of Eric Olson’s search for a resolution regarding the death of his father for 60 years”. Errol Morris, the creator of the show, said that “What Wormwood tries to do is tell a story about how we know what we know and how reliable is that knowledge. On the podcast “Intercepted”, Morris said that the title is taken from Hamlet, “wormwood” is the poison used to assassinate Hamlet’s father and the word he mutters in the mousetrap scene.

There are of course allegations that the CIA murdered Olson to cover up the fact of their experiment and the documentary relies on a key statement in a manual from the CIA in 1953 instructing agents about assassinations. It says “The most efficient accident, in simple assassination, is a fall of 75 feet or more onto a hard surface”.

Of course, Morris relishes every aspect of making this documentary since it has the aspect of true crime, and an obsessive subject, which is the son Eric. Viewers must be warned that sometimes the show feels lengthy, but Eric has thought about his father’s death a lot and Morris is in no mood to rush through it while presenting it to us, and instead, we are treated to a maze of facts. While navigating it, we feel as though we are in drug-induced states as well and become unsure of what is true, what is justice, and even begin to question reality. This is the powerful message that ‘Wormwood’ leaves us with, in the end.

RogerEbert.com sums it up well, saying. “The intercutting of the recreations with the interview footage and other formal choices by Morris—for example, he’ll often place archival footage in one half of the screen and then insert that footage on an old-fashioned TV in what looks like a hotel room on the other half, placing history and recreation of history next to each other—make “Wormwood” feel like a maze for the viewer as well as Olson.”

Hopefully, if there is an upcoming season, Morris will keep the tonality of the show and delve into deeper secrets, leaving no stones unturned. We are sure, with time, his style will only mature even further, and the upcoming season will in all likelihood outdo the previous one.

Wormwood Season 2 Release: When does it premiere?

‘Wormwood’ Season 1 premiered on December 15, 2017. There is no news yet about another season, and considering the show has been branded as a miniseries, Morris might move onto something else. So, for all practical purposes, the show stands canceled. However, the finale did not show the death of Frank Olson properly, leaving some matter to be unpacked, should Netflix decide to make another season. In an unlikely scenario of the show getting renewed, we will keep you updated about the ‘Wormwood’ Season 2 release date.

You can check out the trailer for ‘Wormwood’ season 1 below. If you have not seen the series, and have an interest in conspiracies, then this is the show for you.