10 Worst Marvel Movies of All Time

In the recent years, the MCU and the DCEU are dominating Hollywood, with the release of a movie every few months, they have literally taken over the cinematic world. However, the history of Marvel films extends long before the MCU was ever created. Previously, they made films under the banner of Marvel Entertainment. Even though it has enjoyed slightly more success in comparison to DC in the very recent past, it’s difficult to forget some of the stinkers made on Marvel characters in the past. Here is the list of top 10 worst marvel movies ever made.

Imagine the hype if the next Spiderman film was gonna feature the Sandman, Venom and Green Goblin, all at the same time. Oh, and it also was going to include Black Spiderman, the upgraded version of Spiderman from the comics. That is exactly what ‘Spider-Man 3’ promised. However, it seemed that the writers went in a little over their head with the amount of different stories they tried to cram into the film. Although the first two films in the series weren’t the greatest films ever made, the best feature about them was how focused they were. Right from the beginning of Spider-Man 3 however, the parallel story lines get messy and finally crash and collapse to wreck the film. The main villains are given a very short amount of screen time and the themes of ‘inner conflict’ which the film set out to explore becomes a joke. Sam Raimi is undoubtedly a talented director, but he will definitely regard this film as one of his biggest failures. 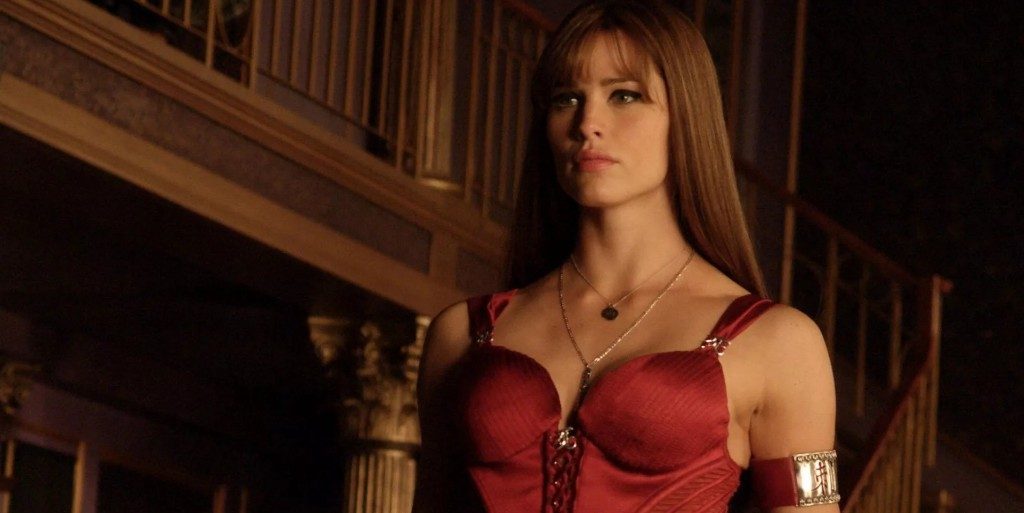 After the horror that was the Daredevil film, it was no surprise that people had their doubts when a ‘spin-off’ film was announced with Jennifer Garner in the lead, reprising her role as Elektra. Their doubts were justified when the movie bombed horribly at the box office. The slow and illogical plot did the movie no favours and the only thing that the film had going for itself was the decent performance of Garner. A lot of plot points in the film are sketchy and left unexplained and at times, there are sequences which have no relevance to the story at all. The villains look ridiculous at times and the CGI is below average for a big budget Hollywood production. 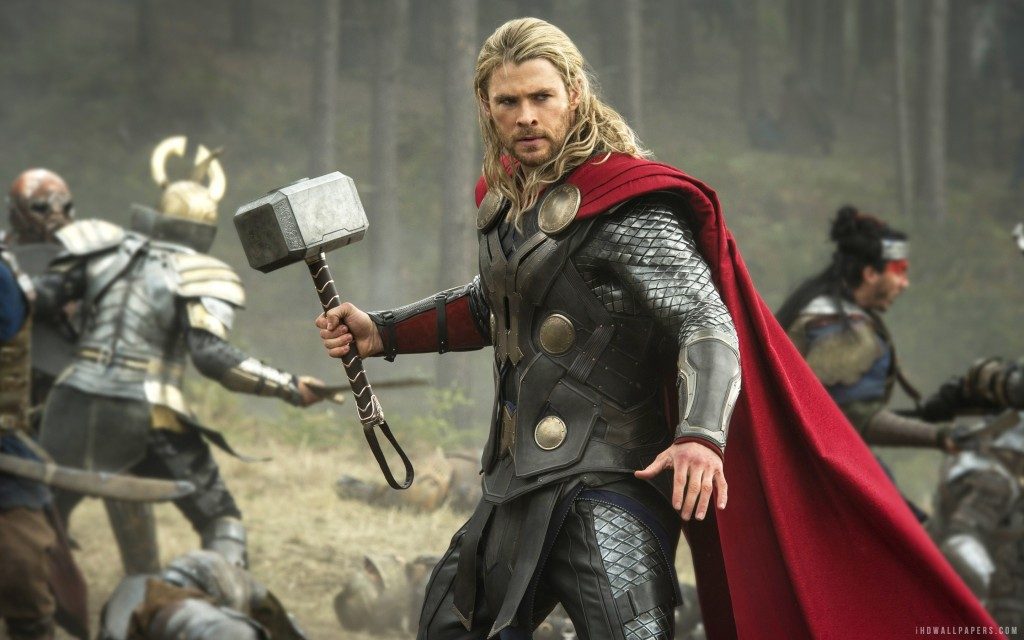 One of those rare MCU films which could be rated below average. The back story and character motivations are laughably sparse. Most of the characters seem one-dimensional, with the possible exception of Loki. The plot is a typical, cliche action film plot and the writing seems to be absolutely lazy. The MCU has proved that it can make a film with a reasonable plot, pacing and good character development but this just seems to be a ‘moneymaker’ sequel. I’m not particularly a fan of the first 2 Thor films as well, even though they were decent movies in general. This film is all over the map with scenes of badly choreographed action, bad comedy and acting. Definitely the worst film the MCU has put out and hopefully the worst it will ever put out. 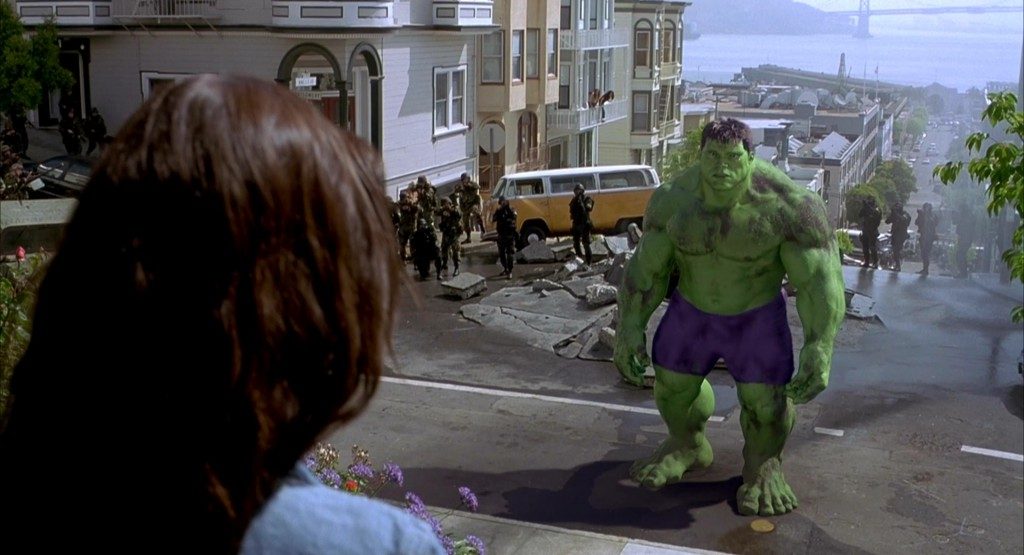 Long before Mark Ruffalo and Edward Norton donned the role of the big green man, Eric Bana and Jennifer Connelly starred in the 2003 film about the same character. With Ang Lee at the helm, the film did seem promising but failed to deliver. The plot is paper-thin. While Bana acts with more conviction and skill than many superhero actors, he is only ever used for acting that varies between the extremes sad and confused in the film. His versatility could have been explored more and is completely ignored in the film, making his performance seem monotonous. The action scenes are also sub-par and rare. They seem too overblown and bizarre at times, even though they attempt to emphasise the sheer strength of the Hulk. The only redeeming quality the film had going for itself was some decent CGI. 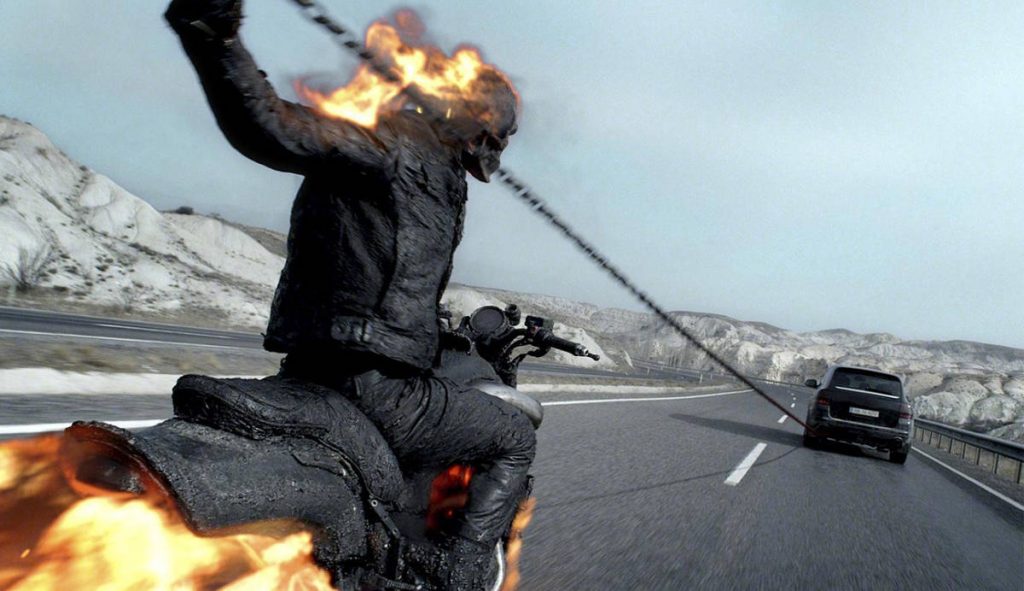 ‘Ghost Rider: Spirit of Vengeance’ is the sequel to ‘Ghost Rider’, a below average movie in itself. The sequel, however, was downright ridiculous. It’s very difficult to understand how an A-grade Hollywood production comes up with films of this caliber. I admit that Nicholas Cage is my least favourite actor, one who doesn’t deserve to be an A-lister in Hollywood. Even though he has produced some decent performances over the years, I honestly think he does much more bad than good. There is literally not a single redeemable quality about this film. The plot and the acting are both terrible. The special effects in particular, seem to be a step down from the first film, looking laughable at times. I wonder if the way these two films failed discourages the MCU from exploring the character of Ghost Rider in any of their films or television shows. 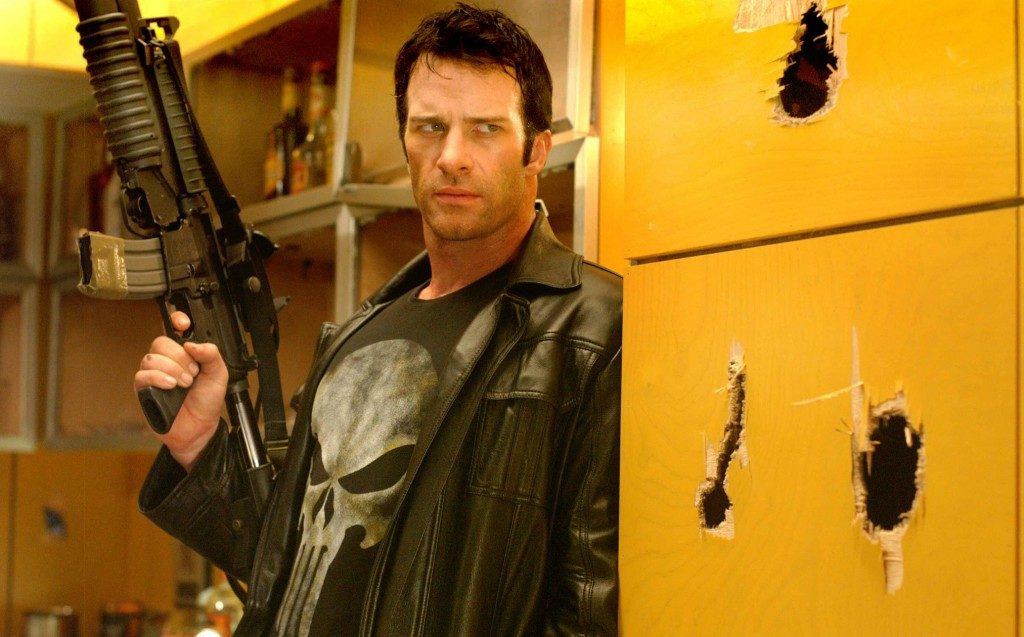 The Punisher is one of my favourite characters in the Marvel comics. There have been quite a few attempts to bring the character onto the big screen but most of them have failed and quite miserably so. With John Travolta playing the villain and Thomas Jane as The Punisher, it wasn’t wrong to expect a decent film. However, this dark, anti-heroic, violent vigilante is completely ruined with the cartoonish sequences present in this film. The Daredevil television series developed the Punisher character brilliantly and had you feeling for him and hating him at the same time. None of the actors do a good job of portraying their characters including Travolta. The dialogue is bland and very uninspired. Future films centering about this brilliant character must look to the TV series for inspiration. 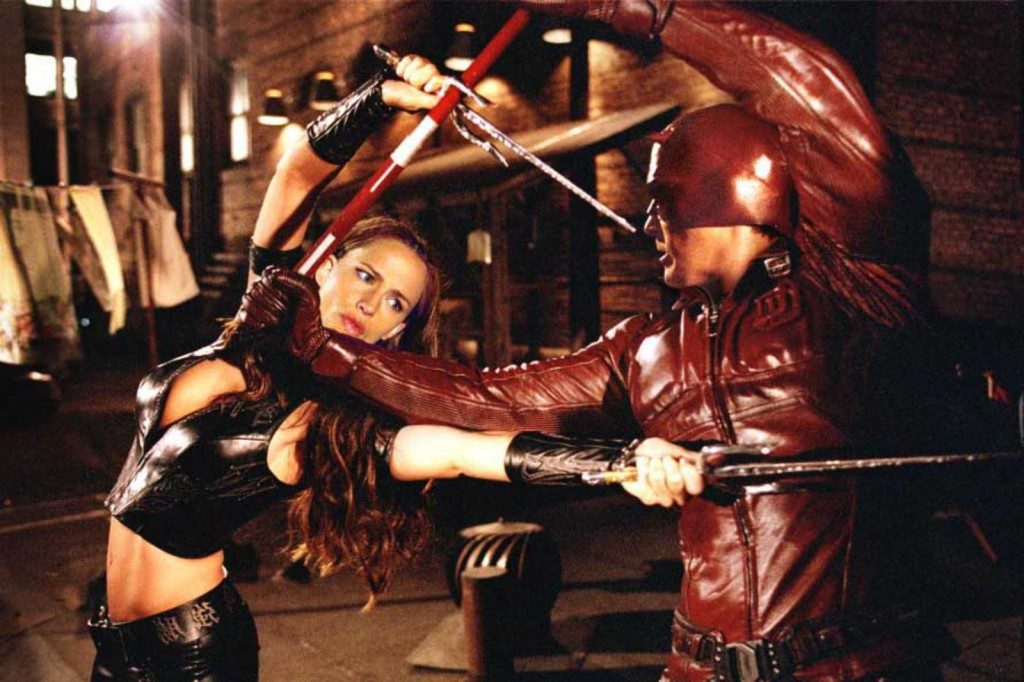 Long before Charlie Cox brought Daredevil to life in the critically acclaimed televisions series of the same name, Ben Affleck played the character in a film in 2003. Considering the prolific and talented actor Affleck is, it’s really surprising how both of his superhero films till date have been bashed. The dialogue consists of a large number of cheesy lines which ruin the dark character Daredevil is supposed to be. The stunts are ridiculous at times, considering the fact that Daredevil is largely human, with heightened senses. The CGI is unrealistic as well. Perhaps the only good thing that came out of this film was the romance between Jennifer Garner (Who played Elektra) and Ben Affleck, they are married today. 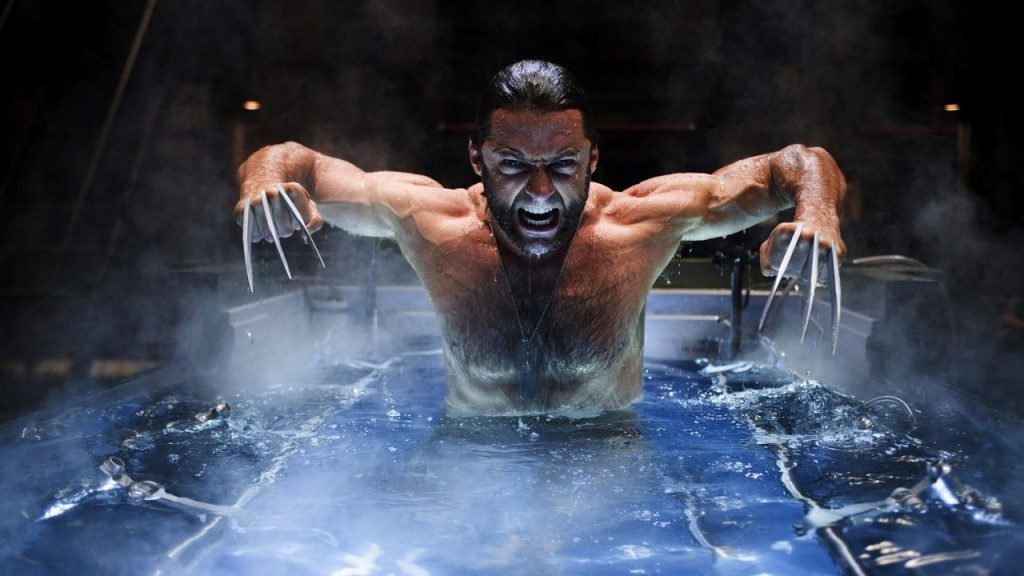 With Hugh Jackman starring as Wolverine, you can’t do much wrong right? Apparently not. ‘X-Men Origins: Wolverine’ is a film even Jackman would like to forget, with its lack of much needed character development and absence of story cohesion, it is not surprising to note that the film was panned by critics and its audience alike. It does seem as the creators decided to make the film more appealing to the eye than to the mind. Another major problem with this film is that it tries to continually broaden its scope, introducing many new characters, (Blob, Gambit, Cyclops) and in doing so, derails Wolverine’s story. Hugh Jackman gives his weakest performance in his foundational role as Wolverine. While the film may function as mindless popcorn entertainment, the inherent complexity in Wolverine’s backstory which the film does not even try to tackle, makes it an insult to fans of the comic source material. 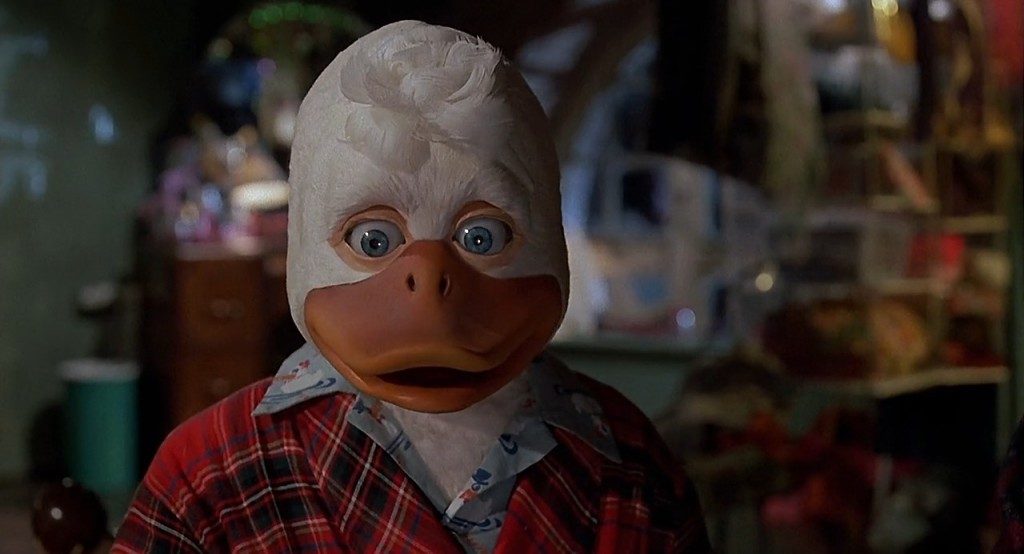 Many declare this film to be the ‘Worst Movie Ever Made’. The screenplay is mind-bogglingly awful. In fact, the only reason a film this bad was made in the first place was due to the presence of George Lucas as executive producer, who was hot off the Star Wars trilogy. The character of Howard the Duck is intended to be humourous but comes off as mildly annoying. Even the setting of the film, which is supposed to be Cleveland, Ohio, looks nothing like the real place whatsoever. The movie is R-Rated and made for adults but has the intelligence level of a kids film. A completely forgettable film made under the Marvel banner. 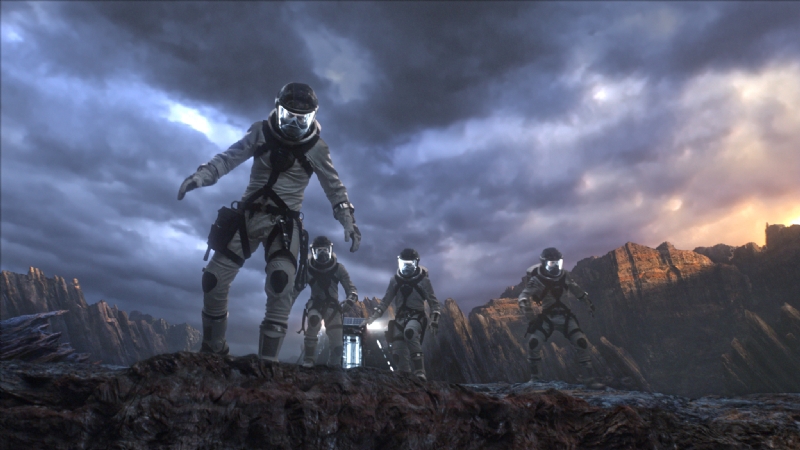 There seems to be some sort of ‘curse’ around films on the famous Fantastic Four. Not a single film made featuring these characters has been even slightly above average and with renewed attempts, the films just seem to keep getting worse. The 2005 film based on these characters wasn’t exactly a good film, even though it starred the likes of Jessica Alba and Chris Evans. It did seem that we could only go uphill from there. However, with the release of this one in 2015, we realised how mistaken we were. It was a talented cast with Kate Mara as Sue Storm, Miles Teller as Reed Richards, but the film in itself is among the worst Hollywood films ever made. It’s very difficult to comprehend what the movie tries to go for. Is it trying to be dark and gritty? Because it’s definitely anything but that. The villain, who happens to be one of Marvel’s most menacing villains, Dr. Doom is turned into an absolute joke and makes an appearance which could generally be called a cameo in the film. Quite frankly, it is a movie where nothing happens! A terrible plot, cringe worthy dialogue and bad acting put this movie at the top of the list.