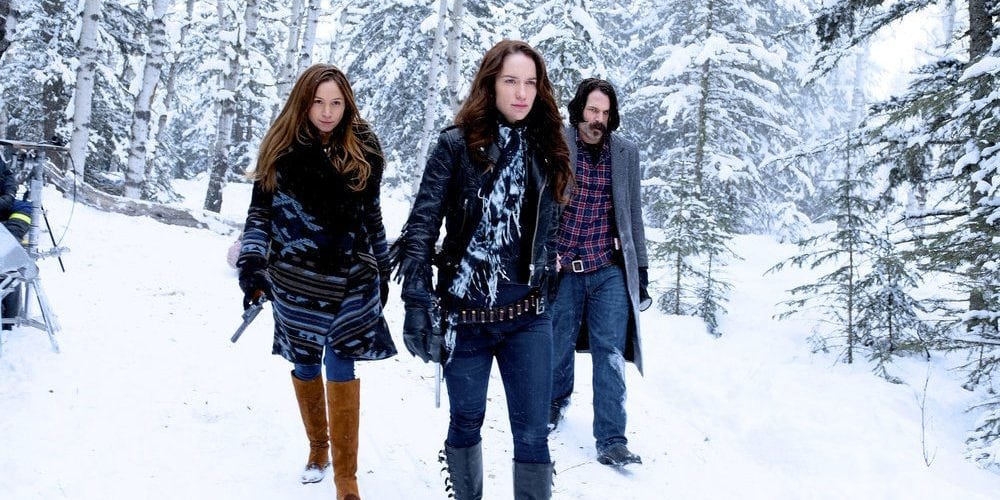 The show is a relatively recent one, and Season 1, consisting of 13 episodes, premiered on April 1, 2016. It immediately created a buzz among television critics, and left a lasting impression among viewers. Unsurprisingly, a couple of months later on July 23, 2016, Syfy renewed the show for a second season, which then premiered a little less than a year later on June 9, 2017. Season 2 was received even greater praise than Season 1, prompting Syfy to renew the show again. Season 3 subsequently premiered on July 16, 2018, and matched Season 2 in terms of critical acclaim. If you’re a fan and wondering whether ‘Wynonna Earp’ will return for a fourth season, the good news is that it has been greenlit by Syfy. The bad news, however, is that it still might get cancelled. Read on to know more about the details of the upcoming season.

Wynonna Earp Cast: Who is in it?

In the show, Melanie Scrofano plays the role of the titular character Wynonna Earp, who is the great-great-granddaughter of legendary lawman Wyatt Earp, and carries his “Peacemaker” handgun. Dominique Provost-Chalkley plays the role of Wynonna’s younger half-sister, Waverly Earp, who is an expert on ancient history.

Shamier Anderson plays the role of Deputy Marshal Xavier Dolls, a combustible mutant lizard-man and a special agent with the Black Badge division of the United States Marshals Service. Tim Rozon plays Wyatt Earp’s famed partner, Doc Holliday, who has survived till the modern-day owing to a curse that grants him eternal health. Finally Katherine Barrell plays the role of Deputy Sheriff Nicole Haught, thereby wrapping up the list of main cast members.

If Season 4 does work out for ‘Wynonna Earp’, we expect most of the main cast members and some of the recurring cast members to make a comeback and reprise their roles.

Read More in TV Preview: The Standups | The Rain | The OA

Wynonna Earp Plot: What is it about?

‘Wynonna Earp’ is replete with supernatural elements and follows the titular character when she turns 27 and gets supernatural powers by way of wielding her great-great-grandfather Wyatt Earp’s special 16-inch barrel “Peacemaker” revolver. Throughout the show, we see Wynonna take on supernatural creatures like revenants, reincarnated outlaws killed by Wyatt, and vampires to keep her hometown of Purgatory and those she loves safe. The show is set in a fictional, cursed patch of land near the Canadian Rockies called the Ghost River Triangle, which is a place inhabited by evil, supernatural creatures of all kinds.

Once Wynonna gets her supernatural powers, she is recruited by the secret Black Badge Division (BBD) of the United States Marshals Service, headed by Special Agent Xavier Dolls, which is committed to fighting supernatural creatures to keep people safe. Over the course of the show, others like Wyatt’s ageless partner Doc Holliday and Wynonna’s sister Waverly join the BBD as they all look to take the fight to the enemy.

To summarise the seasons briefly, the first season sees Wynonna and co. take on revenants led by local revenant leader Bobo Del Rey, who kidnap Wynonna’s elder sister Willa. The second season sees Wynonna grappling with pregnancy while fighting supernatural creatures, while her younger sister Waverly struggles with possession by a demon and doubts about her lineage. In the third season, Wynonna gives up her baby to return to her life of demon-hunting, and the overarching story revolves around a powerful demon who is believed to have cursed the entire Earp family. Without giving away spoilers, the third season had an explosive finale, and has laid the groundwork for the fourth season to take the show to a whole new level.

While one does not expect action fantasy horror series’ to have outstanding critical acclaim, ‘Wynonna Earp’ seems to have achieved the impossible. Season 1 of the show had a great Rotten Tomatoes score of 85%, but Seasons 2 and 3 raised the bar to insane levels, with both seasons clocking perfect scores of 100%. Overall, the show has a brilliant overall Rotten Tomatoes score of 95%, and television critics just can’t get enough of it. While viewers too have loved the show, they have not loved it as much as critics have, and ‘Wynonna Earp’ enjoys a good overall rating of 7.4/10 on IMDb, based on nearly 15,000 votes.

Wynonna Earp Season 4 Release Date: When is it coming?

Days after the premiere of Season 3 of ‘Wynonna Earp’ on July 16, 2018, Syfy, at the San Diego Comic-Con, announced on July 21, 2018, that it had greenlit the show for a fourth season. While the announcement left fans of the show overjoyed, production for Season 4 seems to have run into problems.

On February 22, 2019, it was reported that production for Season 4 had been delayed owing to financial difficulties at IDW Entertainment, one of the production houses which produces ‘Wynonna Earp’. Thus as it stands, production for Season 4 remains in limbo, and IDW Entertainment is looking for funds to keep the show going. The reports led to a frenzy among fans of the show, and many took to social media to voice their support for the show. Syfy, for their part, tried to assuage fans’ fears, and released a statement saying, “Syfy ordered Season 4 of ‘Wynonna Earp’ from IDW and is completely committed to the series. This has not changed.” But, as it stands, we don’t know whether Season 4 will live to see the light of day. If it does, we expect Wynonna Earp season 4 to release sometime in 2020. We will update this section with news on the fate of Season 4, as and when reliable information on the same surfaces.

While we wait for news on the fate of Season 4 of ‘Wynonna Earp’, here is the trailer for Season 3 to give you a glimpse into the show and the story thus far.