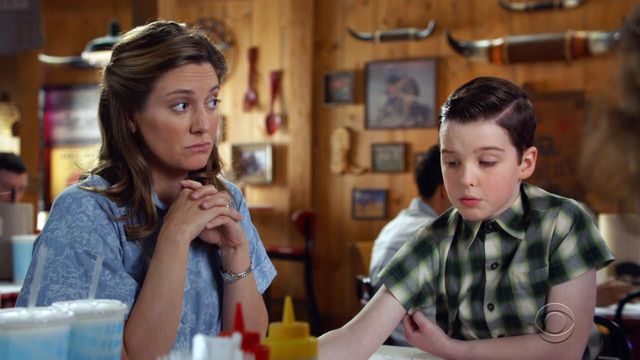 ‘Young Sheldon‘ is well-loved among ‘The Big Bang Theory‘ fans, especially since Jim Parsons narrates the show. We are taken into Sheldon Cooper’s childhood, as we get a better sense of who he is. Obviously, there are several easter eggs, which are recognized by fans who love the quirky character.

In fact, the last episode itself, sees Sheldon going to Caltech. Naturally, this is exciting, because we see a young Sheldon setting foot on the campus where he’d eventually meet all his friends. Excited to find out about what happens in this episode? We have got you covered.

‘Young Sheldon’ Season 3 Episode 18 is slated to air on Thursday, March 12, 2020, at 8/7c on CBS. Titled “A Mother, a Child, and a Blue Man’s Backside”, the episode sees Sheldon acting out. He decides to stop living by his mother’s rules when she stops him from reading a comic book she thinks is mature. Check out the promo below.

The episode starts with John forgetting that he had class because he’s working on a paper. Sheldon is quite intrigued by the paper which takes up so much attention. Thus, he tries to read it in the front seat of the car itself, despite getting car sick.

John seems to have made a mistake in his paper, and George advises Sheldon to be nice when he brings it up. Sheldon offers his help but wants to be made a co-author in the paper. This is rather unfair since he has not written it.

Naturally, he is turned down, and to take revenge, he calls up Dr. Linkletter, accusing John of plagiarism. Linkletter takes John’s side but does promise to speak with him. However, John feels insulted by the way Sheldon operates and does not want him in his class anymore.

Meanwhile, Mary goes for a meeting at Brenda’s where she is tasked with getting trophies. However, at the trophy store, she sees there are no trophies with girls on it, because the owner believes girls don’t play basketball. Mary goes elsewhere and even gets a custom made trophy. However, Missy doesn’t want her trophy to be different and wants one like the other boys.

Towards the end, we see Georgie taking Jenna on a date. However, Veronica works at the place he takes her. Upon running into her, things turn a little awkward between Jenna and Georgie. However, it is good that he and Veronica are comfortable around each other. Ultimately, Georgie’s date is salvaged. It remains to be seen what happens to Sheldon, now that he has to face the consequences of the plagiarism accusation, which is rather serious.