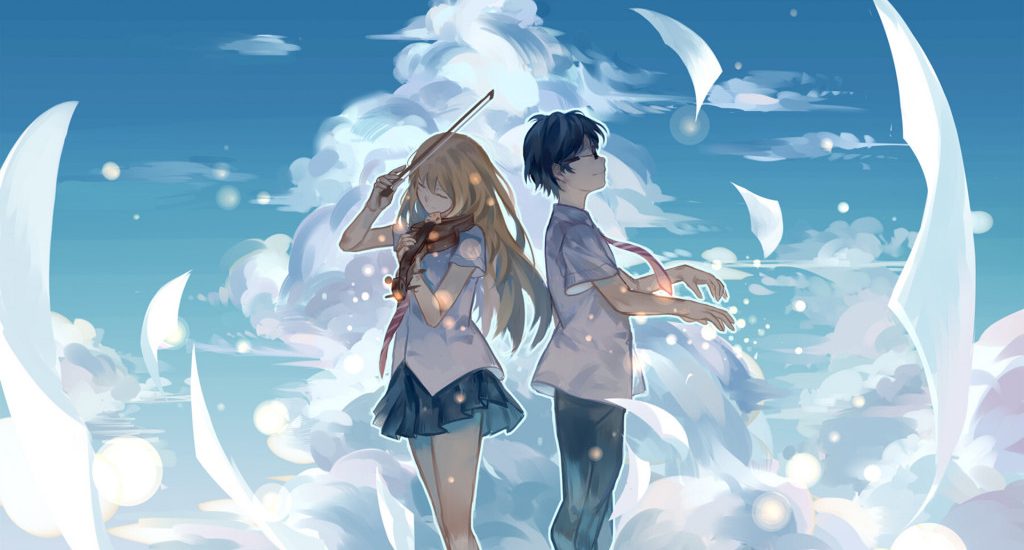 I’ve got a lump in my throat and something flew into my eyes, or maybe I’ve just been watching too much of ‘Your Lie In April’. Remember how you felt when you watched ‘The Fault in Our Stars‘ for the first time? Multiply that bittersweet feeling by ten and that’s exactly how you are going to feel once you are done with the 22 episodes of ‘Your Lie in April’. There are many amazing slice-of-life anime series out there but what makes this one exceptionally incredible is its music. Even if you have no knowledge of classical music or if you’re not a big fan of this genre, ‘Your Lie In April’ will surely be an exception.

Not the just the music, but even the vibrant colors portrayed in the anime play a critical role in what it tries to project. Kousei, one of the major characters, is full of a world with muted dull colors but all that changes when Kaori enters his world. Love can indeed make everything brighter and the visuals of this anime represent that. But apart from being visually and musically stunning, ‘Your Lie in April’ goes really deep with its plot as well. Even the themes of the show subtly drift between music, love, and tragedy, all of which hit right in the gut.

The story of the anime is quite generic and that’s the reason why many anime viewers downplay this one a little. But judging it solely based on its storyline is rather unfair because it has so much more to it. Animation can be an amazing medium to portray something that live-action movies cannot; take ‘Love, Death and Robots’ for example. Most anime are treated like any other regular TV show but ‘Your Lie in April’ makes full use of this medium’s potential.

Those who haven’t seen the anime yet, just give it a shot without assuming that it’s going to be just another “slice of life” anime show. The emotions, the main storyline, and the stunning visuals of the anime will surely send you home with an ambivalent feeling of melancholia. The ones who have seen it are probably still recovering from the roller-coaster of emotions that the first season offers. But considering the ending of the first season, it seems more likely that it might have an OVA or “special” next. There is nothing wrong with hoping for a new season but, as of now, we wouldn’t guarantee anything in that regard.

Your Lie In April Season 2 Release Date: When will it premiere?

‘Your Lie in April’ season 1 premiered on October 10, 2014 and ended its run on March  20, 2015. It has a total of 22 episodes with each one being 22 minutes long. As discussed earlier, the chances of getting a new season are almost close to nil but we might get a few more bonus episodes in the form of OVAs. If you’re still hungover with those waves of emotions, then fan fiction is always an alternative, or maybe just moving on with life would do you some good. In the unlikely scenario of the show getting renewed, Your Lie in April season 2 release date could be sometime in 2021. If there is any news regarding a new season of the anime, we’ll make sure that you are updated with it as soon as possible

Your Lie In April English Dub:

You can stream ‘Your Lie in April’, also known as ‘Shigatsu wa Kimi no Uso’, on Crunchyroll, Netflix, Animelab and VRV.

Your Lie In April Plot:

Kousei Arima is often referred to as the “human metronome” by his peers and his school teachers for his prodigious piano playing skills. But Kousei is left with the inability to hear or feel his own music after the tragic death of his mother, who used to be his only motivation to play music. He decides to give up on his music career and start a new life, leaving his glorious piano days behind him.

Years go by and still, Kousei feels the same about his decision of going not back to his old life of admirers and competition. Instead, he lives a humdrum life that’s all black and white, with two of his friends, named Ryouta Watari and Tsubaki Sawabe. Things only change when he finally meets a beautiful musician named Kaori Miyazono, who holds the same passion for her violin that he once held for his piano. Inspired by her, he gets back to his long lost love for music. A sense of vibrancy starts to restore in his colorless life and his old sense of purpose grows within him.

Pinning it down, it’s a coming of age story where the main character Arima struggles dealing with his past and that in turn affects his future. He is willing to move forward and despite the atrocities he faces, he is still able to make progress, albeit rather slowly. Since it’s a coming of age show, a budding romance has to exist for obvious reasons. This romance is the major theme of the show and it later even branches out into a few sub-plots. This is where the anime gets a little rocky and reveals a few of its flaws. These subplots are unnecessary and drag the show to something that could’ve been finished off in just 15 episodes. But the ending just makes up for all of it and just thinking about it makes me want to curl up like a ball and cry my eyes out in a dark corner.

As mentioned earlier, there are chances of getting a few bonus episodes of the anime but a new season seems very less likely. But instead of feeling bad about it, we should learn to appreciate some shows the ways they are, which in this case is the anime’s sweet and simple end.

Your Lie In April Characters: 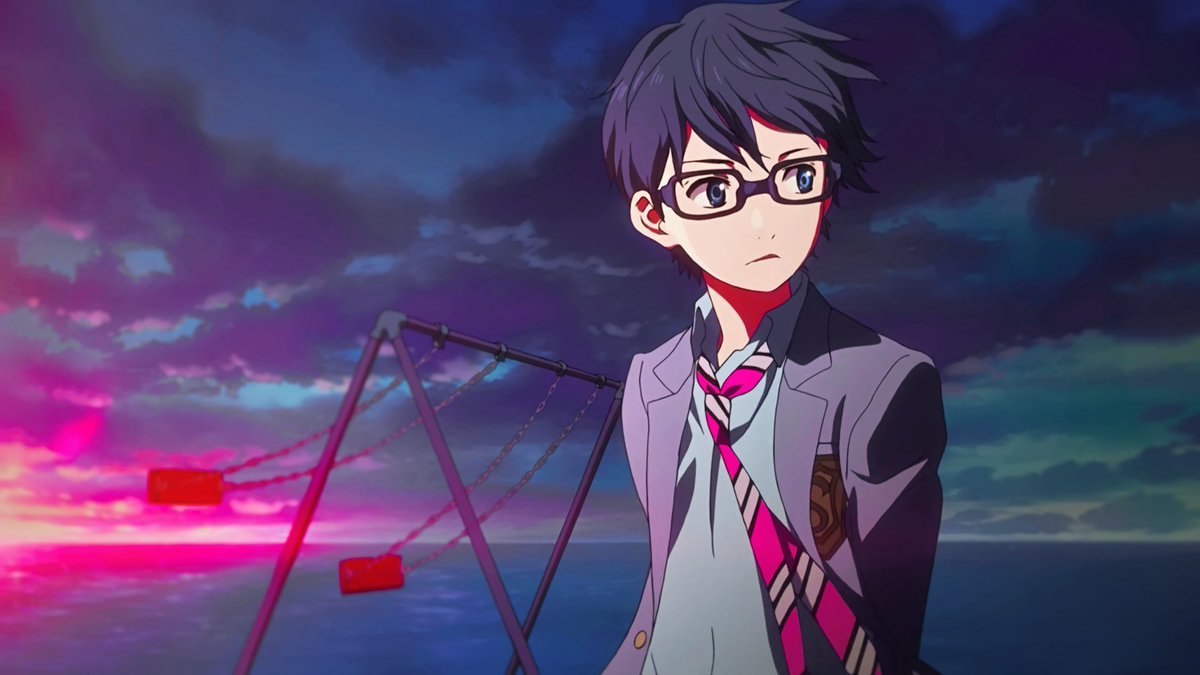 Kousei was once a prodigal pianist who became the youngest person to ever win the Saki competition. But right after his mother’s death, the trauma leaves Kousei with a numb feeling of not being able to listen or feel his own music. His life becomes a monotonous tedium, completely devoid of any color or happiness. Kousei always seems to be lost in his own world and does not seem too concerned with others around him. As a child, he was always calm and composed, and the only thing that mattered to him was his love for music. Even after reaching his teenage years, a kind of pure innocence reflects in his personality. The only way he is able to project his feeling for Kaori is by staring at her. What he truly admires about her is her free-spirited nature. He only wishes that he could just be half as confident as her and this is something she helps him with later in the series. 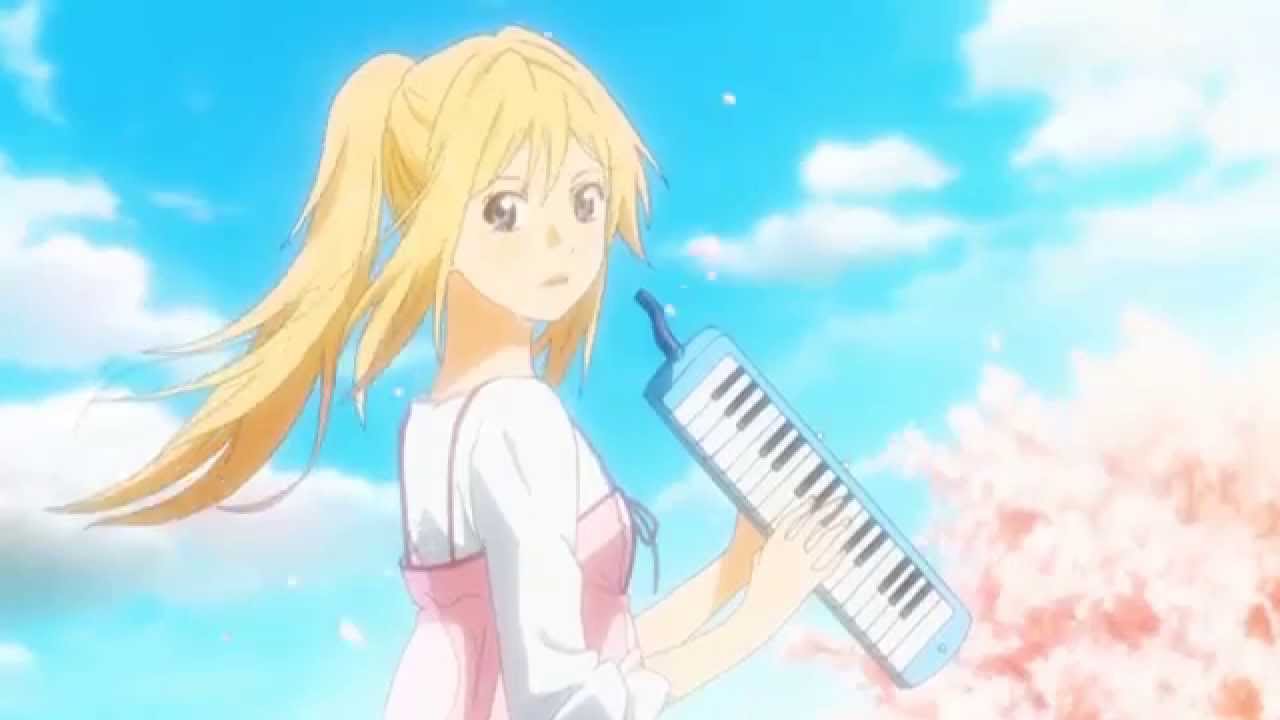 Kaori is a violinist who after Kousei’s mother’s death brings him back to the world of music. She inspires him and even pushes him to pursue his talent all over again. If it wasn’t for her, Kousei would never snap out of his colorless, miserable life. Kaori has a very free-spirited nature, which directly reflects on pretty much everything she does. Even when she plays the violin, it has a very deep form of vibrancy to it. She is confident and kind to everyone around her, which is probably the reason why all of her friends like her. Kasori makes sure that no one around her is ever affected by her emotions and because of this she even carries a fake smile at times. Her outlook towards life is extremely optimistic and she handles situations that many would find difficult or challenging.

What Kousei truly admires about Miyazono is her compassionate and independent nature that often reflect on her style of playing the piano. Even during music competitions, this is the first thing judges observe about her and it’s one thing that allows her to excel at her musical endeavors. There’s also a lot more that goes into the character development of the two main protagonists of the show but revealing all of it would not be fair, so let’s end that here.