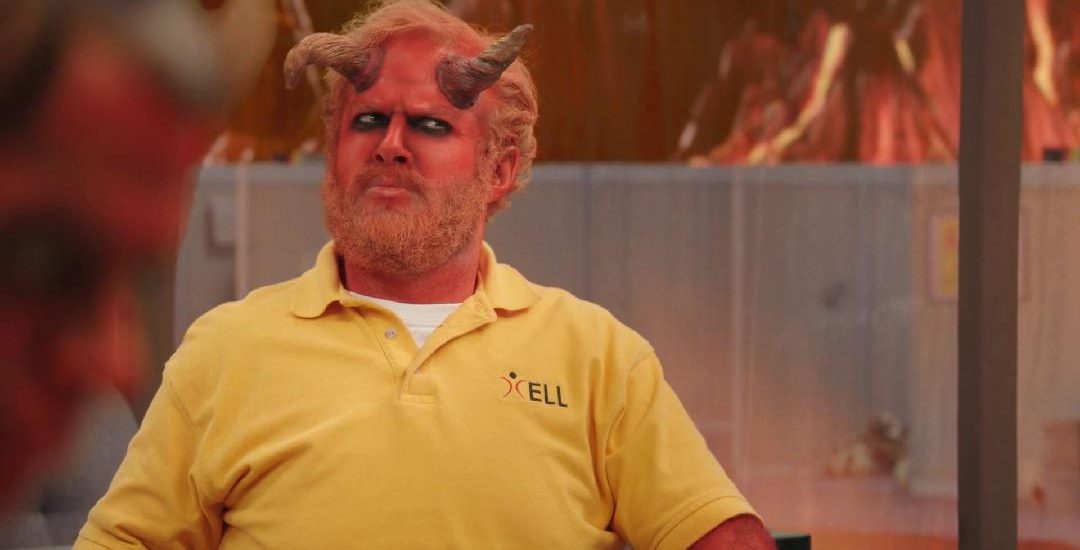 How stoned are you? Rate this in your high-o-meter before watching any of Adult Swim‘s shows; because your rate of enjoying this channel’s freakishly funny shows is directly proportional to this figure. ‘Your Pretty Face Is Going to Hell’ is just another example from the platform’s catalog of genuinely comic, absurd shows. A live-action, workplace comedy, it debuted on Cartoon Network’s late night programming block on April 18, 2013. The plot revolves around Gary, a low-level demon employee under his boss Satan, who captures souls from the human world to climb up the corporate ladder in Hell. However, his stupidity, kindness, and lazy attitude often become obstacles in this path toward success.

Your Pretty Face Is Going to Hell Cast: Who is in it?

Your Pretty Face Is Going to Hell Plot: What is it about?

In this workplace comedy, the primary focus is on Gary, whose sole ambition is to somehow rise from his low-level position and secure a respected promotion. In order to achieve this, he has to attempt and recruit as many human souls as possible. When frustrated, he often appears unexpectedly in his old apartment on earth to grab a beer or two. In his quest, he is assisted by Claude, who joins him as a freshly recruited intern. However, gradually, Claude is soon transformed from the under-confident newcomer to a sniveling, back-stabbing co-worker. Amidst all this, Gary is constantly tortured by his no-nonsense, forever grumpy, and demanding boss — the Devil aka Satan. Among the other demons, you also get to see Eddie, the tortured soul, whose screams can often be heard in the background as he is being whipped or severely punished.

‘Your Pretty Face Is Going To Hell’ is, in fact, a regular workplace comedy, with the only difference being the office set-up and location. The primary concept revolves around the various schemes employed by Gary and Claude in an attempt to trick people into signing their souls for Hell instead of Heaven. In each of its 11-12 minutes episodes, we witness Gary and his peers wearing yellow polo t-shirts with a Hell logo and waking up for their jobs every Monday — which is all the days on the calendar. For their smoke breaks, they climb to the top of a mountain, for an eternally unreachable pack of cigarettes. In their various devious marketing strategies, they make weird plans to attract new clients. For example, once, Claude and Gary try to get a baseball player named Cortez Cruz to kiss a pentagram instead of a crucifix.  In another instance, Gary loses his “summon word”, due to which he is forced into the mortal world by a pair of stoners who drag him out of hell. Every incident manages to bring out a good dose of laughter and makes for an entertaining midnight watch.

Just like its previous installments, season 4 of ‘Your Pretty Face Is Going to Hell’ follows Gary and his crew as they embark on a venture to capture fresh soul recruits from Las Vegas. This time, they are equipped with an amazing new board game. Heaven also features in the picture, with its employees competing with Gary in deciding the fate of dead mortals. Additionally, there are additionally guest artists who make special appearances, in the likes of John Amos, Joey Fatone, Jon Glaser, and George Wendt. What are their fates this time? It is the same as that of Dustin Diamond who is now doomed to star in a bad sitcom for eternity? Watch the series to find out!

We hope that the upcoming season will, as Adult Swim puts it, see the competition gets stiff as Gary and his co-workers look for inventive ways to top their recruiting game.

Your Pretty Face Is Going to Hell Season 5 Release Date: When will it premiere?

‘Your Pretty Face Is Going to Hell’ season 4 premiered on Adult Swim on May 3, 2019. Focussing on aggression that is the sole ingredient of damnation, this series is always a treat for your eyes. And season 4 is its most polished and creative version yet, with Hell’s workers discovering new, innovative ways of recruiting.

If you have watched the show you will know that the program explores several mythical demons, urban legends, real-life serial killers, and paranormal subject matter. The fourth installment also sticks to this theme, by featuring new concepts such as Ouija boards, an homage to ‘Human Centipede’, and the Four Horseman of the Apocalypse. Bringing in a fresh twist to the otherwise conventional stereotypes about Hell, ‘Your Pretty Face Is Going To Hell’ is just another example of Adult Swim’s capability to produce extraordinary masterpieces.

As far as the next season goes, we don’t have an official announcement yet. Though considering the popularity of the show, we would be surprised if it doesn’t get another season. Our best guess is that if the show does get renewed, ‘Your Pretty Face Is Going to Hell’ season 5 can release sometime in May. 2020. We will update this section as soon as we hear more.

Your Pretty Face Is Going to Hell Trailer

While we wait for an update on’Your Pretty Face Is Going to Hell’ season 5, check out the season 4 trailer to refresh your memories. If you haven’t seen the show yet head over to Adult Swim to watch episodes of the previous seasons.