It finally took weeks and weeks of waiting at theatres for the credits to roll, while the cleaning crew for the next showing at the cinema give you all kinds of looks for ruining their workflow, for a film to finally have one. Because let’s face it. Audiences, especially Indian ones, do not like to stay behind for credits, unless it is for a Marvel film. Consequently so, the films of the MCU too are to be blamed for this addiction of sorts: and I have thus lost count of the number of times I have been trumped at the movies for having sat through multiple movies’ credits only to find no film material of any kind. It is always nice to hang around to see the massive list of people that actually bring a film to fruition; it is the expectation that trumps us. Anyway, moving on to why we are here in the first place.

For fans of this unlikely (now) franchise, I am happy to report that there is something to make you stay back for when the credits start rolling. ‘Zombieland Double Tap’ has both a mid-credits and a post-credits scene, so it may be worth your time to stay back in your seats, if watching the credits is not your thing. If you are still to watch ‘Zombieland Double Tap’ today or this weekend, that’s all the information you need, and this is the end of the line for you since whatever I discuss next will be full of spoilers. 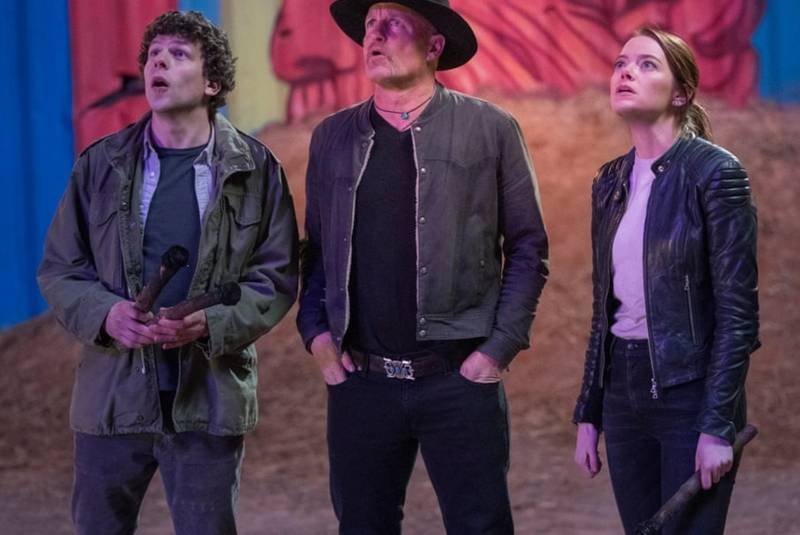 Chances are that you won’t miss the mid-credits scene since it begins shortly after the credits roll and Jesse Eisenberg’s voiceover takes you back to Day Zero, when the Zombie outbreak actually happened. This may still be in keeping with the first film’s explanation of the Zombie outbreak stemming from a strain of the Mad Cow Disease, picked up by a person having a contaminated burger at a gas n gulp, but it’s a bit of a far stretch. Anyway, the mid credits scene begins with Columbus still remorseful about what he did with Bill Murray in the first film, easily the most laugh out loud scene of the first film. When Little Rock asks a dying Bill Murray in the film about any of his regrets, he says “Garfield, maybe” which is what makes the mid credits scene all the more funnier.

The voiceover quickly cuts to Bill Murray doing a press junket for a Garfield 3: Flabby Tabby, a third Garfield film that never happened, thankfully. While he is answering a number of questions, a particularly unusual request comes from NBC journalist and eminent TV personality, Al Roker, who continually presses on Murray to make the hairball noises from the two ‘Garfield’ films. This all plays out after Murray has acknowledged that he did the third one for money to buy drugs, and while an insistent Al Roker continues coercing Murray into making that voice, he immediately turns into a zombie. It is between this moment and the next that Bill Murray realises what’s happening, that he picks up a steel chair and slams Rokers’ head with it, following which he casually kicks ass and starts killing zombies with innovative methods, left, right and centre. The scene that occurs after the credits have rolled is a relatively shorter one and also stars Bill Murray, who is now attempting to make the same hairball coughing noises in front of a Spanish reporter, in her “native tongue”, which is just an oddball piece of comedy. However getting to watch Bill Murray trying to incorporate a Spanish accent in a cough is a small price to pay for staying those extra five minutes or so.

Both these scenes, while following the norm of franchise films, simply choose to have their fun and leave the exiting audience with a smile, as opposed to setting up a sequel or a potential next entry in the franchise. We’ll be examining the prospects for a potential sequel in another writeup so stay tuned.