Where to Stream Zombieland? 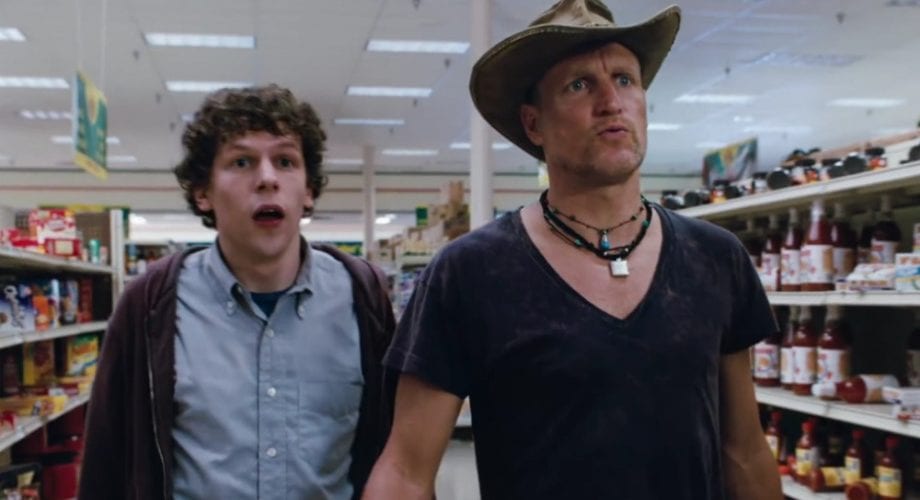 Zombie movies are usually quite intense and thrilling as you get to see a battle involving an army of the undead. However, they can also be funny, with over the top action and some catchy dialogues. ‘Zombieland’ is here to prove that point. The post-apocalyptic horror comedy is directed by Ruben Fleischer. The story follows a geeky college kid who tries his best to survive a zombie apocalypse. In the course of his travels, he meets three strangers and together they take a road trip across the USA attempting to find a safe haven where they will be protected from the undead. Upon release, the movie became a smashing critical and commercial success. Naturally, now you must be wondering where to stream ‘Zombieland’. We are here to tell you that, but first, let us walk you through the plot of the movie.

What is Zombieland About?

‘Zombieland’ starts two months after a strain of mad cow disease has mutated into a mad person disease and then mad zombie disease. The United States is overrun by zombies and many Americans have turned to vicious, murderous zombies. Since getting attached to survivors is not recommended, as people might die easily at any point in time, the survivors use their home cities as their nicknames. At this point, we are introduced to Columbus, a college kid who is trying to go home to see if his parents are alive. He runs into Tallahassee, a survivor who is somewhat eccentric but is extremely violent at dispatching zombies. He seems to miss his pet dog and has an affinity for twinkies, which he always tries to find.

Although Tallahassee is not exactly sociable, he agrees to let Columbus travel with him. The two meet Wichita and Little Rock, who are sisters trying to con others. They lead the pair into believing that Little Rock has turned into a zombie, which causes them to give up their weapons. Turning the weapons on them, the sisters steal their car. However, the pair finds a Hummer loaded with weapons and chase the sisters. The girls set another trap in place and take the two of them hostage. Tallahassee manages to steal his gun back and has a face-off with Wichita, who does not want to back down. However, Columbus has an outburst and tells them that they have bigger concerns, vis a vis, zombies.

The girls share their plan of going to the Pacific Playland amusement park in Los Angeles, which they believe to be zombie-free. Columbus hears the news that his hometown has been completely overrun and destroyed. Knowing that his parents are likely to be dead, he goes along with them to Los Angeles. On the way, he tries to woo Wichita. Moreover, he also finds out that Tallahassee’s sadness over his dead dog is actually about his son who did not survive the apocalypse.

Upon reaching Hollywood, they go to Bill Murray’s house. They meet the actor who has survived by disguising himself as a zombie. However, while Columbus and Little Rock are watching ‘Ghostbusters‘, Murray tries to scare them as a practical joke. It backfires as Columbus accidentally shoots and kills him. Wichita grows closer to Columbus as Little Rock and Tallahassee, who did not bond earlier, begin to get along. Despite her attachment, Wichita does not tell the duo but takes Little Rock and leaves for the amusement park. Columbus follows and convinces Tallahassee to come along.

In the park, they turn on all the rides and lights, determined to have a good time. However, this attracts zombies from the nearby area. When all hope seems to be lost, Tallahassee and Columbus ride in. They distract the zombies, with Tallahassee locking himself in a booth and shooting all the undead, while Columbus rescues the girls. Wichita kisses Columbus as a show of appreciation and tells him her name is Krista. As they leave the amusement park at the end of the movie, Columbus realizes that without relating to people, they are akin to zombies. He is glad for the family he now has.

Is Zombieland on Netflix?

Netflix has an amazing collection of movies and television shows that sets the platform apart as a premier content provider. While ‘Zombieland’ is not on the platform, you can check out ‘The Walking Dead‘, an intense series about groups of humans who try to survive in a world that has been overrun by zombies.

Is Zombieland on Hulu?

Hulu has a wonderful collection of movies and television shows that the platform keeps making smart additions to in order to stay ahead of the competition while also catering to different viewers. While ‘Zombieland’ is not on the platform, you can check out ‘Fear the Walking Dead‘, which deals with a world that is combating a zombie problem.

Is Zombieland on Amazon Prime?

Amazon Prime has an enviable collection of movies and television shows that can perhaps only be bested by Netflix. While ‘Zombieland’ is not available to Prime subscribers as is, you can rent or buy and watch the movie on the platform. It costs $2.99 and $3.99 to rent the SD and HD versions respectively, while you can buy them for $9.99. Check it out here.

Where Can I Stream Zombieland Online?

Can I Stream Zombieland Online For Free?

Freeloaders are in luck since you can use the free trial period offered by Fubo TV to stream and watch ‘Zombieland’. Since it is just a movie, you should be done watching it before the trial period is over. However, we urge readers to pay for all the art they consume.